Clockwork is an alien from Tech 10: Star Spirit.

He is an Earth-83 version of the canon Clockwork.

Clockwork generally shares his appearance with his Omniverse appearance in the original Ben 10 timeline, but with several differences. He has several tubes and armor pads colored with a darker gold, and has dark green hearts in place of his bolts. Instead of gears, he has cloud-like temporal energy inside his glass viewing port.

Negative Clockwork is a dull, metallic purple with red accents.

InverTrix Clockwork is identical to Ben's Clockwork, save for the green being replaced by a magenta-red color. 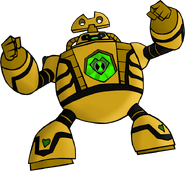 Clockwork as used by Ben Tennyson. 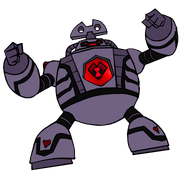 Clockwork as used by Albedo.
Add an image to this gallery

Clockwork's body is relatively weak, only having the durability of bronze. In addition, his heavy body results in him having slow movement speeds and low stamina.

Retrieved from "https://ben10fanfiction.fandom.com/wiki/Clockwork_(Earth-83)?oldid=867609"
Community content is available under CC-BY-SA unless otherwise noted.