Clockwise is the Infinity's DNA sample of a Chronosapien from the planet Khrohnhos in Bryce Bowman: Origins.

Clockwise is a robot-like alien with skin that is made of gold, with black stripes and a transparent piece of circular glass on his chest, revealing gears inside of him.

He has copper eyes and a green mouth.

The glass reveals light from the inside of his body that silhouettes the gears.

The Infinity glows brilliantly on Bryce's arm. A brass sheet of metal glides over Bryce's arm, travels over his chest and down his other arm. He stares off into space as the brass continues over his face. He spins, slowly, as the metal begins morphing. His whole metal body inflates and reshapes. A key-like piece sprouts on top of his head. Clockwise takes a single step back and holds the arm on the opposite side of his body out, his hand open, and poses.

At the end of Secrets: Part 2, Azmuth unlocked a second playlist for the Infinity, one of the aliens unlocked was Clockwise.

In Price of Fame, Clockwise tripped Sunder but then reverted before the fight ended.

Clockwise can slow down time around himself, making it look like to others that Clockwise is moving at very high speeds.

By rotating the key on his head, Clockwise can create a projection of what happened in the past.

Clockwise can travel through time.

Clockwise can fire green time rays from his hands or chest which have various effects, such as sending people back in time or into a different timeline or age an object/person to dust.

Because he is as a technological being, it is possible for a Galvanic Mechamorph to merge with Clockwise, enhancing his abilities. When upgraded, Clockwise's time rays become stronger and he gains the ability to morph his hands into drills and gains shoulder mounted rocket launchers.

Clockwise is not very durable.

Because of his large body, Clockwise is quite slow and low on stamina. Therefore, he tires out quickly.

Time has no effect on gumballs and diamond, so Clockwise's time rays are virtually useless on those items.

The use of Clockwise's powers create a ripple effect in time which can be sensed or reversed by another Chronosapien. 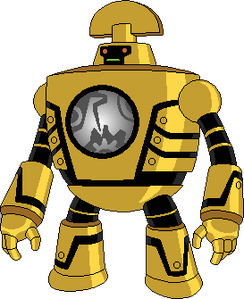 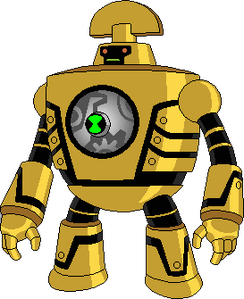 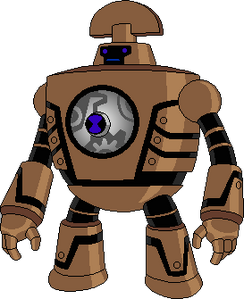