Clockboy is a Ditickgitockalber from Nin'de Reloja, and one of Evan's aliens from Evan Billion. It is one of his additional 20. He also appears in Quatrus 10.

Clockboy is a short, purple humanoid with black eyes and yellow pupils.

He makes portals to the past, future, or somewhere else in the present.

He has no control over what place he makes a portal to. 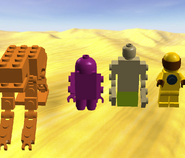