Circadians are Comatose's species. They live on the planet Cathemera.

Circadian's have soft white bodies. They are often described as inviting by species of all shapes and sizes thanks to their completely inoffensive appearance.

Circadians have an incredibly unique diet. They do not feed off of material substances like most species, instead they feed off of the imaginative potential of the species they put to sleep. This does not hurt their prey, if anything they tend to feel better for it.

It is because of this that Circadians, despite being predators that can feed on nearly any kind of lifeform with the ability to imagine, are often considered the friendliest and kindest species in the universe. They do not fight. If they cannot reach and agreement with words, they will use sleep to force their opponent to find a peaceful solution. Malicious Circadians are incredibly rare.

Circadians have minor shapeshifting abilities, able to generate tentacles from their body that they can use to grab unwilling prey. Once trapped, their prey is lulled into a deep sleep. the Circadian can then enter their prey's mind via dream manipulation.

Circadian dream manipulation allows them to communicate with the host, view their memories, give them new ones, etc.

Circadians can wake up their prey peacefully, or leave them unconscious when they release them. Released prey can remain asleep for many hours.

Sleeping Circadians have an acute sense of the passage of time. They can go to sleep alongside their prey, remaining inside the same dream if they so choose.

They are resistant to blunt physical attacks

Circadians struggle to fight multiple opponents, or opponents larger than them.

They are vulnerable to fire.

Although Circadians are more resistant to blunt attacks, they are actually weaker than most species to stabbing or cutting attacks as they struggle to defend against them. 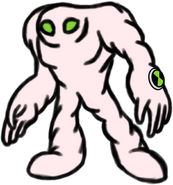