Chunder is the Atomnitrix's DNA sample of the Perk and Murk races of Gourmand from the destroyed planet Peptos XI.

Perk Chunder has green skin, six sprout-like growths on the back of his head, a dark green patch of skin on his head, a lighter shade of green on his face and belly and a crooked teeth overbite. He has whisker-like lines on his face. He also has a green tail.

Murk Chunder has swampy-green skin, tanned stomach and muzzles, black digits and black-green spots on his tail, limbs, hips and on his back. His eyes are sharper than Perk Chunder, look pupil-less and blue. He also has whisker-like lines on his face. His teeth are more alligned than Perk Chunder's with visibly sharp canine teeth. He has two teeth in the shape of an underbite.

Both Perk and Murk Chunders have the Atomnitrix symbol on their stomachs.

Both Chunders have four very strong, adhansive tongues that can stretch to great lengths, allowing him to latch onto large objects and reel them in with relative ease.

Both Chunders' mouths can stretch, allowing them to swallow objects larger than themselves. They are connected with a trans space bladder dimension where he stores all the "food" he eats.

By breathing air out of their mouths, both Chunders are able to fly.

The items ingested are converted into explosive balls of liquid that can be expelled with great accuracy. Perk Chunder can also make them curve, like a boomerang, shuriken, or frisbee. Murk Chunder hasn't shown this.

Perk Chunder is able to take a surprising amount of punishment for a creature of his size, taking the force of a moving car impact as well as surviving after being thrown through a wall.

Both Chunders can eat and spit out energy, such as lasers, in the same way he eats and spits out acid matter. Murk Chunder can spit out slime. Perk Chunder hasn't displayed this.

Both Chunders have a limit of how many big objects they can swallow at once.

Both Chunders are slow when they eat a lot of things and becomes excessively fat. Otherwise, they are somewhat quick, considering their small size.

If either Chunders does not spit out something he eats, he will get very fat and rendered immobile until he spits it out. 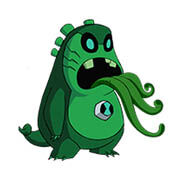