Chuckarms is a fusion between Multi-Limbed Aliens and Upchuck forms part of the Biomnitrix Unleashed project and is originally one of the fusions of DNA Lab. Original base made by Luki12024 and remake by Rizegreymon22 from Deviantart.

He looks like Multi-Limbed Aliens, but obese and shirtless, his skin is dark while his face, chest and hands have a clearer hue, similar to Upchuck's skin, Has Multi-Limbed Aliens' beard, moustache and number of eyes, while has the face, tail, gills toenails, teeth and sprout-lie growths of the two subspecies of Upchuck. Wears Multi-Limbed Aliens' gloves, pants and belt with the Biomnitrix symbol on it. 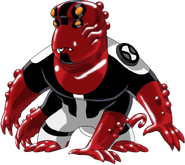 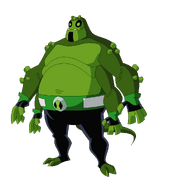 Original base of Chuckarms redux, made by Luki12024
Add an image to this gallery
Retrieved from "https://ben10fanfiction.fandom.com/wiki/Chuckarms?oldid=764872"
Community content is available under CC-BY-SA unless otherwise noted.