Chronoblast is the Atomnitrix's DNA sample of Chronosapien from an unknown planet.

Chronoblast is a robot-like alien with skin that is made of copper with black stripes and a transparent piece of blue hexagonal glass, revealing gears inside of him. He has a large body and holes on the protrusion of his head. On his back, he has a black stripe that splits in two stripes with a key hole between them.

By rotating the winch on his head, Chronoblast has the ability to create a projection of what happened in the past.

He can slow down time so he can seem to move very fast.

Chronoblast is not very durable, as a strong laser beam could break any part of him and make him shut down.

If he gets strongly hit on the gear on his head, he gets badly stunned.

Because of his large body, Chronoblast is quite slow and low on stamina. Therefore, he tires out quickly. 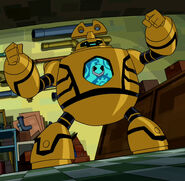 Chronoblast's Time lapse
Add an image to this gallery
Retrieved from "https://ben10fanfiction.fandom.com/wiki/Chronoblast?oldid=893769"
Community content is available under CC-BY-SA unless otherwise noted.