They are large aliens with incredible strength. Both male and female of this species have long tendrils like those of an octopus or squid, most females appear to have them on there head, while males on their chin, though females have "beauty marks" on their face.

Chimera Sui Generis are blessed with incredible natural strength enough that Myaxx, a non-warrior member of the species, was able to tear battle robots apart with her bare hands. Certain members of the species have been shown to have amazing endurance. Even before being enhanced, Vilgax survived a nuclear explosion after a warhead hit his ship, the Chimerian Hammer, at point blank range, though he was largely believed dead after this. Vilgax has mentioned that his people are not warriors like him, although the stature of an unaugmented specimen, Myaxx, suggests otherwise. It would seem then that Myaxx's cowardice may be a natural trait among the species, and is lost on Vilgax, possibly relating to his apparent insanity.

In some continuities (such as the Delta Dimension of Earth-1010), Chimerans have the power to fire lasers from their eyes and transform their arms into many prehensile tentacles. 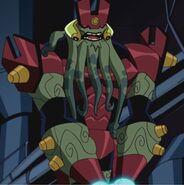 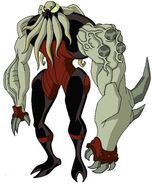 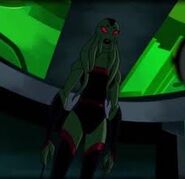 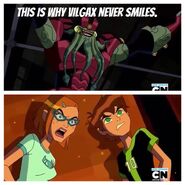