Start a Wiki
Chill Factor is an alien in "The Hero Generation." His species lives on the same planet as Seismec's species, but on the opposite side, where no sun shines.

Chill Factor is a humanoid alien that has various shades of blue on the parts of his exposed body. He wears gray pants, and two gray lower arm braces. He also has a gray chest piece on his chest, on which the KeyTrix symbol rests. The most noticable thing about Chill Factor is the gargantuan liquid nitrogen tank on his back, that hooks onto a mouthpiece that covers Chill Factor's mouth, all connected by tubes. The chest piece is also connected to the liquid nitrogen tank by tubes.

Chill Factor wears a tank of liquid nitrogen on his back, which connects to a mouthpiece, so he can breathe liquid nitrogen to survive. The liquid nitrogen also connects to his chest, where it makes his heart colder, so it drops his body temperature to a low but safe rate. T He can also spray ice mist from the palms of his hands from gathering moisture in the air, similar to Hydro-Tide.

If the tank of liquid nitrogen were to be disconnected from the mouthpiece or anything of the sort, Chill Factor would only be able to live for a few minutes. This is because the liquid nitrogen simulates the tempurature of the oxygen on Chill Factor's planet, which is about -3000 degrees. If he inhales any other oxygen higher than this, it can cause serious damage to his being or even result in death.

Chill Factor lives on the same planet as Seismec's race, Thermetican, but on the side of the planet where no sun shines, so it is always immensly freezing. Their kind developed the liquid nitrogen tank so they could journey on the side of Thermetican where Seismec's species lives.

Appearances in "The Hero Generation" 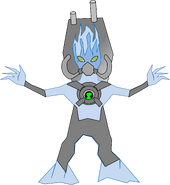 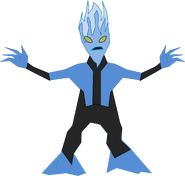 Chill Factor's species without a nitrogen tank
Add an image to this gallery
Retrieved from "https://ben10fanfiction.fandom.com/wiki/Chill_Factor?oldid=203684"
Community content is available under CC-BY-SA unless otherwise noted.