I'm sorry because of the bad redaction of the article, but it was made by a non-english-speaking person. 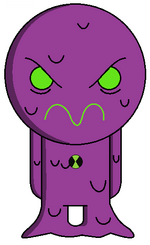 Chemictron is an alien from an unknown species from an undiscovered planet, that appears frequently in Gonza & Isma vs. The Mini-verse.

Chemictron is completely made out of a harmful chemical, that can change at any time, for example, he changes from being made of hydroxide sodium, to just alcohol. All of this while remaining the same viscosity and color: purple as the main one, and blue in the special, random form.

He has a deformed humanoid form, with a head but without neck, that shows some angry green/red eyes (depending if Gonza or Isma is using him) along with a wavy closed mouth. He has a type of gill hidden behind his mouth, supposedly for helping him to "breath".

He constantly drips chemicals like sweat because he is "80% Stable".

He has the Minitrix symbol on his chest. 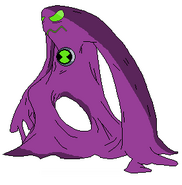 How it would look in the normal world

His special form (recolor)
Add an image to this gallery

Retrieved from "https://ben10fanfiction.fandom.com/wiki/Chemictron?oldid=877218"
Community content is available under CC-BY-SA unless otherwise noted.