Cheesewheel is made completely out yellow cheese, with some holes in them.

His body is a wheel with long arms and legs protruding out of it's sides, along with a head in the front and the Omnitrix symbol on the front of the wheel. In wheel form he looks like a giant cheesewheel.

Cheesewheel is an alien composed purely out of yellow cheese, allowing him to stretch and regenerate parts of his body at whim. Although his shapeshifting is very limited, he can change his arms and legs to various objects, including swords and assault rifles.

Cheesewheel can fire off the cheese from his body, as he can regenerate it easily. He can also manipulate other cheese telekinetically, and can change its type.

Cheesewheel can "roll" into a wheel form by merging his limbs and head into the wheel shape of his body. While in wheel form Cheesewheel has some degree of control over his movement, allowing him to speed up or jump. In wheel form his durability is increased, allowing him ram enemies without being hurt too much.

As he is made out of cheese, Cheesewheel is incredibly sensitive to heat, and can melt quite easily, weakening him or even killing him. Cheesewheel is also very edible.

Cheesewheel's body shape is quite clumsy, as knocking him over the side in either forms will usually leave him stuck on his side. 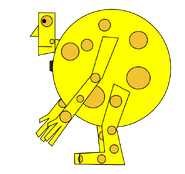 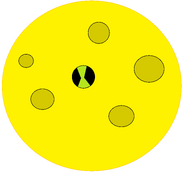 Cheesewheel in wheel mode by Dan 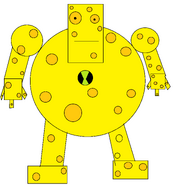 Cheesewheel in Dan 10 (drawn by Dan) 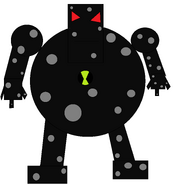 Epic gif of Cheesewheel rolling into a wheel
Community content is available under CC-BY-SA unless otherwise noted.
Advertisement