Charles Arctic Polarson is a Ursapiens from the planet Earth in Charles 10 who wields the Polytrix.

He has two forms, because Ursapiens are flip-sided shapeshifters, with two forms each. In his human form, he has ice-blue eys, extremely messy brunette hair, and a dark red collared shirt under a grey hoodie with red accents. He wears the Polytrix on his left wrist, even though he is left handed. And of course he wears pants. In his alien form, he resembles a bipedal polar bear with a patch of messy, longer fur on his head. He wears a larger version of his shirt from his human form, and is very skinny (in terms of the species he is, in his alien form he is still pretty muscular) in both forms. He wears the Polytrix as a collar in his alien form, and he has a basket strapped to his back with a young dragon in it. In season 3, the dragon does not fit in the basket. In a possible future (seen only in a live-action movie), the brightness of his eyes is greatly magnified by the Polytrix, and he dresses similarly to the 12th Doctor. His hair is grey, and he carries a sonic screwdriver.

He is very playful, and optimistic. Or he is self-critical, and pessimistic. Didn't I tell you Ursapiens were flipsided?

He is bookish and humorous. He sometimes yells, though. Trust me, you do not want to hear a polar bear yelling.

He can switch between his two forms, and can transform into different aliens. He is a trained Plumber (no, not the ones that fix pipes! At least not actually fix pipes.) At some point, he will gain a biological automaton's arm with a disguised hand.

Fire. Also if his Polytrix times out, he cannot use it for any function.

He appears in all episodes of Charles 10. 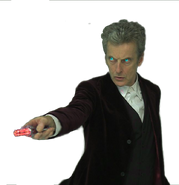 Season 2 (leaked)
Add an image to this gallery
Retrieved from "https://ben10fanfiction.fandom.com/wiki/Charles_Polarson?oldid=791585"
Community content is available under CC-BY-SA unless otherwise noted.