The Cerebruesapians are an alien species in the series, Brandon 10. They live on the planet Brillia.

Cerebruesapians appear as short, stocky humanoids. They wear grey, mechanical suits and operate them in order to move around. Cerebrusapians have a large exposed brain that is shielded by a transparent shielding. Without the mechanical armor, Cerebruesapians actually appear more so as brain-like creatures, especially when they are infants.

Cerebruesapians have the ability to produce electricity simply by thinking. Because their large brain produces many electrical currents with each thought they produce, Cerebruesapians can harness this current as a form of both offensive and defensive capabilities.

Naturally, Cerebruesapains are incredibly intelligent and are capable of, not only capable of prodigious amounts of calculations, but also telepathy with enough concentration. This telepathy can also expand into a hive mind of sorts, connecting others minds to their own.

Because of their brain shielding, Cerebruesapians have no known weaknesses. However, if their shielding were to be lowered or rather they were to expand their shielding around an unknowing threat, they can be attacked and struck in their brain- causing immense damage ranging from unconsciousness or even brain damage. 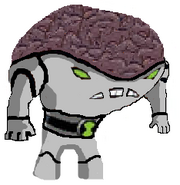 Brainiac, the Omnitrix/Ultimatrix's DNA Sample of a Cerebruesapian
Add an image to this gallery
Retrieved from "https://ben10fanfiction.fandom.com/wiki/Cerebruesapian?oldid=921447"
Community content is available under CC-BY-SA unless otherwise noted.