Cementomb is the Omnitrix's DNA sample of a Kragylsei from the planet K'orr-odum set to appear in Bryce Bowman: Devil's Bounty.

Cementomb is a tall, rock-based being, about fifteen feet tall.

Cementomb has small protrusions of littler rocks all over his body.

He has piercing red eyes.

Grey rocks sprout from Bryce's arm and cover his hand. His face is covered in the same rock, and shortly after his eye is converted into a red glowing gem. He bends forward as his shoulders expand and his fingers merge so that he only has four. Cementomb poses with his arms flexed in a sort of curled way.

Cementomb can morph his body in almost any shape. He is particularly found of reshaping his hands into maces or greatly increasing their size to smack enemies with.

Cementomb is able to manipulate any earth or ground near him and raise it and bend it to his will. He can also do this with cement, although it's unclear why.

Cementomb can also levitate rocks and boulders and use them as ranged weapons.

Cementomb is quite strong and incredibly durable, but he seems to have a weakness against magic.

As mentioned above, Cementomb is weak to magical attacks. They seem to burn his skin, like an acid, although is not specifically weak to acid.

Some powerful acids could injure him, and he is not impervious to extreme heat. 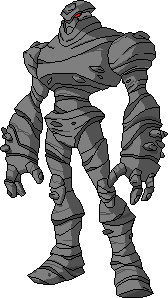 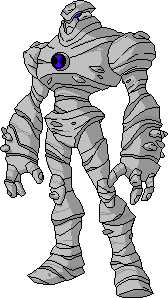