Celida is a character from Brandon 10.

Celida is a blue, humanoid female. She has blue skin, blue hair and has stars on her body. She is seemingly made of space matter. She also has bright green eyes.

Celida's abilties are not officially known to anyone but as seen in The Ultimate Device, Celida has the abiltity to bring beings and objects to her realm, seperate objects and place people as well as objects wherever she desires. 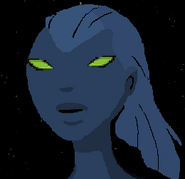 Celida in The Ultimate Device
Add an image to this gallery
Retrieved from "https://ben10fanfiction.fandom.com/wiki/Celida?oldid=765928"
Community content is available under CC-BY-SA unless otherwise noted.