Celestium resembles Alien X during UAF. He has blue stars and a light blue underline. He also has the Alfatrix's symbol on his chest. 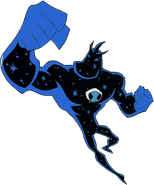 Using His Powers
Add an image to this gallery

Retrieved from "https://ben10fanfiction.fandom.com/wiki/Celestium?oldid=907992"
Community content is available under CC-BY-SA unless otherwise noted.