Cathemera is a planet that is home to the Circadians. It is a free use planet.

Cathemera is a metal world covered in lush greenery. Few Circadians still live on the planet, as most have found happiness in the company of other species.

Many space stations orbit the planet, where Circadian businessmen run spa and relaxation centres. Species from across the galaxy come here to relax. These spas are particularly well regarded among soldiers, who often visit to help deal with PTSD and related conditions gained during their conflicts.

Cathemera was once a harsh metal world with tall steel mountains and dark corridor-like caves. The winters were long and harsh, particularly near the poles. As a result, the Circadians evolved to be able to hibernate through the long winters. Eventually predators evolved in the dark to feast on the sleeping Circadians. In response the Circadians adapted the ability to share their sleep, leaving the predators unable to attack them effectively. Eventually these abilities became more refined, and these predators became domesticated.

After thousands of years, global warming began to occur. The winters became shorter and brighter, and plant life began to bloom into more Earth-like species. Green ferns and vines began to take root in the nooks and crannies of the metal environment. 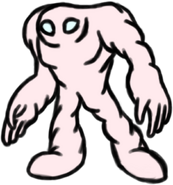