Hat Forms are created by hattycharging a species, which means they gain a cool hat. The Hat gives them hat related abilities, for instance, Hat Diamondhead gain the ability to create Diamondhat minions, and Hat Crashhopper can move at speeds of a well lubricated hat.

Hat Aliens look the same, except they gain a nice hat.

Hat Forms were unlocked in The Magical Hat. However, Ben recieved hat forms because he had a magical hat. In order to transform into a Hat Form without a magical hat, one must place any hat on the Ultimatrix symbol and press it, causing the alien to become a HAT FORM!

In BTSFEOOF, Muslim Ben uses mainly Hat Forms, due to easy access to hats from his taqiyah on his head. Later in the series, after Crazy Ben's conversion, he also begins to use hat forms.

The Most Useless Hat Alien of All Time 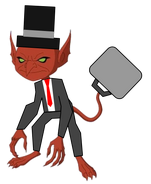