Cannonbolt is an Arburian Pelarota (a play on the Spanish word pelota, which means "ball," and rota, a play on the word "rotation") from the destroyed planet, Arburia.

In The New Omniverse, Cannonbolt looks similar to his appearance in Alien Force and Ultimate Alien. The Ultimatrix MK10 symbol is on his chest and the black stripe from the Omniverse is gone. His eyes are no longer connected to his shoulders, and his palms are now flat instead of bulging. The yellow bolts on his body are now hexagonal and there are three plates on his back, instead of two. All the yellow is now green. 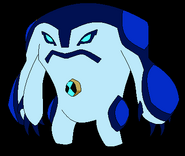 Cannonbolt can curl into a ball, encasing himself in his plating. When rolled up, Cannonbolt becomes like a motorized wheel that can move at great speed and use it can increase his rotational momentum to slam into and/or run over enemies. He can also ricochet and bounce off surfaces in this form. He can even use his sphere form to increase his agility by quickly opening up his ball shape while airborne.

He is also seems to be capable of perceiving his surroundings despite his eyes being covered and encased inside his ball form.

Despite his top heavy body, Cannonbolt has enhanced reaction time, reflexes, dexterity, and balance, allowing him to quickly change in and out of ball form to suit his immediate needs.

Cannonbolt's shell is resistant to acids and lava, and can deflect lasers.

From inside his shell, Cannonbolt can withstand even a drop from space without harm from the heat of re-entering the atmosphere, though he can still suffer from mild pain from the force of the impact.

Cannonbolt is subjected to the physical laws of reflection and conservation of momentum, meaning that he has difficulty stopping or controlling his direction if he picks up speed.

Cannonbolt's bipedal form is top-heavy, making him very unbalanced and clumsy, though he can still manage to use his curled shape to enhance his agility.