Cannonbolt is a hulking, broad-shouldered alien covered in natural, yellow armor plating on his back, shoulders, and the backs of his arms.

He is mostly white, with black on his upper half.

Cannonbolt has four claws on both of his hands. He has sharp teeth.

He has a pant-like design on his legs.

The Omnitrix sits on top of his head.

Cannonbolt wears the Omnitrix symbol on his forehead and his eyes are green. He wears a full-body suit that resembles Bowman 10,000's shirt

The Omnitrix glows with bright green light. Bryce's hand expands while a yellow armor plate grows on the back of it. His torso arches backward as armor begins growing on his back and shoulders. He lurches forward, rolling into an armored ball, spinning rapidly. He unrolls, and Cannonbolt poses with one leg bent, one leg all the way down, and both arms out to the side.

Cannonbolt was first used in Bowman 10,000 (Episode) when he defeated a small group of Esoterica.

He was unlocked for Bryce in The Darkest Night: Part Two by Azmuth.

Cannonbolt can curl into a ball, encasing himself in his plating. When rolled up, Cannonbolt can increase his rotational momentum to slam into and/or run over enemies. He can also ricochet off surfaces in this form.

Cannonbolt's shell is resistant to acids and lava, and can deflect lasers.

From inside his shell, Cannonbolt can withstand even a drop from space without harm from the heat of re-entering the atmosphere, though he can still suffer from mild pain from the force of the impact.

Cannonbolt is subjected to the physical laws of reflection and conservation of momentum, meaning that he has difficulty stopping or controlling his direction if he picks up speed. 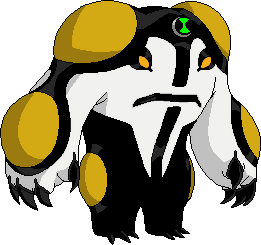 Bryce as Cannonbolt in BBDB 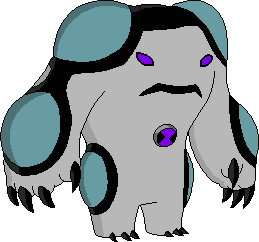 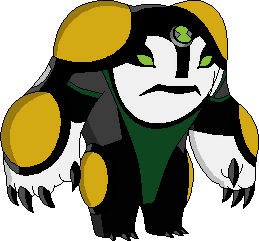