Ben 10 Fan Fiction Wiki
Register
Don't have an account?
Sign In
Advertisement
in: UltiVerse, Aliens, Ben 10: Protector of the Omniverse,
and 17 more

Cannonbolt is the Infinimatrix's DNA sample of a Arburian Pelarota from the planet Arburia in Ben 10: Protector of the Omniverse. He is the Timeline 1 equivalent of the canon Cannonbolt.

Cannonbolt has his Alien Force/Ultimate Alien appearance, but, like his Ben 10,000 appearance, his claws are longer and he has a pants-like design. He also has a vertical black stripe on his waist. His colors match the color palette of Heroes United.

Ben slams down the Infinimatrix dial and is engulfed in a green light.

Ben hovers in a dark green background with light green bubbles pulsating rapidly behind him. Ben's torso, arms and legs begin to expand significantly as his skin turns white. He holds his arms close to his body as his ring and pinky fingers merge into one, turning black and growing longer. The camera zooms in on his head, which fuses into his torso. His arms, back and legs gain yellow armor plating as the camera rotates around Ben's body. Ben's eyes enlarge and become fully green, and a pant-like design appears on his torso. The Infinimatrix symbol pops out of his chest. Cannonbolt does a quick roll before uncurling himself and posing, completing the transformation.

Cannonbolt can curl into a ball, encasing himself in his plating. In general, the Arburian Pelarota species mostly used this maneuver for defense, like an armadillo. However, since Ben did not know about this when discovering Cannonbolt, he weaponized Cannonbolt's originally defensive capabilities.

When rolled up, Cannonbolt becomes like a motorized wheel that can move at great speed (because of chemicals in his exo-plates that reduce friction) and can increase his rotational momentum to slam into and/or run over enemies. Cannonbolt is able to maneuver around his surroundings in ball form thanks to the short fur on his body, registering shifts in air and motion around him. Between that and his excellent hearing, Cannonbolt receives something akin to echolocation - giving him "eyeless" vision.

Cannonbolt can ricochet and bounce off surfaces like a pinball in sphere form, suffering little-to-no loss in momentum.

Cannonbolt can use his sphere form to increase his agility by quickly opening up his ball shape while airborne, create shockwaves, and spin into a fierce tornado.

Cannonbolt seems to be capable of perceiving his surroundings despite his eyes being covered and encased inside his sphere form.

Despite his top-heavy body, Cannonbolt has enhanced reaction time, reflexes, dexterity, and balance, allowing him to quickly change in and out of ball form to suit his immediate needs.

Cannonbolt possesses enhanced strength, being able to fight on par with enemies about his size. He can also break free from traps made of Lepidopterran slime.

From inside his shell, Cannonbolt can withstand twice the heat of reentry into the Earth's atmosphere. Similarly, his shell is resistant to acids and lava, and can withstand the plasma generated by members of Ball Weevil's species.

Cannonbolt's shell can deflect lasers, even when not in sphere form. Because of this, he is practically nigh-invulnerable when curled into a ball.

Cannonbolt can be empowered by electrical abilities, such as those of a Gimlinopithecus. This way, he can gain much more power and momentum when in sphere form.

Cannonbolt is subjected to the physical laws of reflection and conservation of momentum, meaning that he has difficulty stopping or controlling his direction if he picks up too much speed.

Cannonbolt's bipedal form is top-heavy, making him very unbalanced and clumsy. This is because Arburian Pelarotas are made to spin, not walk. However, he can still manage to use his sphere form to enhance his agility.

Cannonbolt's large body makes it hard for him to move in small spaces.

Cannonbolt can emit some sort of odor, which people housed in his spheroid form can find repulsive.

Cannonbolt can be held in place by strong adhesives, as well as beings with as much or more strength than a Chimera Sui Generis.

Cannonbolt cannot roll on slippery surfaces, such as puddles made of a Murk Gourmand's slime.

Despite his shell being resistant to extreme heat while reentering Earth's atmosphere, Cannonbolt can still suffer a mild amount of pain from the force of impact.

In his uncurled form, Cannonbolt can be controlled by a Vladite via their Corrupturas. 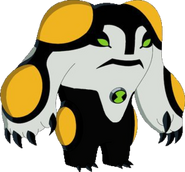