Cannonbolt is the Omnitrix's 1.5 DNA sample of an Arburian Pelarota from Arburia in Ben 10: Omnitrix Unlimited. He is the Dimension 1 equivalent of Cannonbolt.

Before the Omnitrix's 1.5 recalibration in Ben 10: Across the 23rd Dimension, Cannonbolt had his Omniverse appearance.

Cannonbolt has his Heroes United appearance.

Negative Cannonbolt has Cannonbolt's Heroes United appearance, but his skin is greyish white and his armor plates are dark yellow. 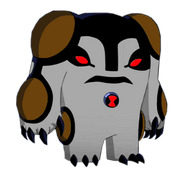