Start a Wiki
Thank you all for making Camineral the Featured Alien of February 2015!

As his name hints, Camineral has the appearance of a camel. He is about 10 ft tall and has a relatively long neck and body. His rear legs are short but his front legs (or arms) are long and aid in balancing. His skin color is grey, although the majority of his body is covered in crimson red-like armor, including his head, which indicates that he is wearing a helmet. He has a silver-colored circular saw blade at the end of both his front legs. He has a long tail which ends with a curved spike. Another notable feature is a third saw blade which emerges from his back, giving him the "camel" look. He has two yellow eyes with black cat-like pupils.

Camineral's large body gives him incredible strength, allowing him to run through matter or smashing objects away.

Despite his size, Camineral is surprisingly agile. The reason for this is unknown.

The saw blades on his front legs and the one on his back can be spun at will and cut through solid matter without issues.

Camineral can also use his tail to tackle down enemies. The spike at the end can be used as a sharp weapon.

Camineral's armor is suited to withstand physical damage, but energy attacks such as lasers or beams are a problem, as Camineral has no way of blocking them and is forced to dodge. 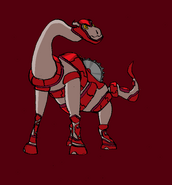 Concept Art by Ren
Add an image to this gallery

Retrieved from "https://ben10fanfiction.fandom.com/wiki/Camineral?oldid=776134"
Community content is available under CC-BY-SA unless otherwise noted.