Calendua is a character that inhabits the world of Tech Cross. She was originally created for the Spring Fanon Con 2020 Character Competition.

An extremely rare marigold-type Somnium Herba from the planet Somnortus, Calendua was born from a seed planted underneath the soil, as are most of her species. From the moment she initially emerged, she was treated with cautious skepticism by the other Herba, who carried a long-standing belief that marigold-types were harbingers of misfortune and death.

Faced with a hostile culture from the outset, Calendua spent most of her time among the non-sapient plantlife on her planet, being fascinated by their varied structures and finding an odd sense of peace among them. Constant harassment and threats of violence from her own species whenever she ventured among them only served to increase her attachment to these plants.

After a particularly harsh rainy season flooded the forests she called home, destroying numerous villages, the superstitious townsfolk actively began hunting her down, blaming her for the incident. Forced to flee her country, she found the rest of the world no less spiteful towards her as she wandered the globe, and eventually decided to leave Somnortus for good.

Being unable to find any sort of steady employment, Calendua's life savings were small, and at the spaceport, she discovered her funds would only get her to a small, backwater planet near the edge of the galaxy; Earth, the third planet in the Sol system. With nothing to lose, she took the plunge and bought a ticket to Earth, leaving her planet behind and stepping out onto a new world.

Unsure of what to do with herself from there, Calendua eventually crossed paths with one Dr. Emilia Krauze, an alien immigration expert and inventor who recommended she pursue her passion for all things herbal by opening a gardening shop. After being given a SapienSwitch to help her along, Calendua opened her business and ended up becoming very successful, with her cheery personality and unmatched knowledge on plants of all sorts making her a go-to source for her community's gardening needs.

Despite her cruel treatment from a young age, Calendua managed to nurse a small but steady spark of hope that kept her going. After forging a new life on Earth, Calendua's full personality was finally allowed to bloom forth, displaying a bright and cheery disposition supported by her relief and appreciation for finding a place to call home.

Calendua retains a very close attachment to plants, thoroughly researching and learning to care for every piece of flora that comes her way. Her passion for her craft is obvious, giving her a rare charisma not usually found in the workplace. Being an alien, she doesn't always understand humans but does her best to resolve problems with compassion, fully aware of the damage that being close-minded and hostile can do.

In her natural form, Calendula has the ability to create and control flowers. Her petal-like hands hide thorned vines that contain an anesthetic capable of putting most any organic species to sleep. Once asleep, she has the ability to enter and control her target's dreams so long as she keeps her vines connected to their body. Some customers have requested she use this ability to cure their insomnia or even interpret their dreams, to which she politely explains that they would be better off consulting a sleep professional. 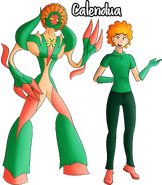