Welcome, one and all, to CaT's Wacky Writing Guide! The goal of this guide is to help you become a better writer on the wiki. Whether or not it will accomplish that remains to be seen. Let's go!

So, you've just discovered this wonderful thing called 'fanfiction', stories based off of a pre-existing work that almost entirely fall out of the realm of canon. After reading through some of the more memorable works, (COUGHCOUGHSHAMELESSADVERTISINGCOUGHCOUGH), you've decided you want to make your own!

So then, let's see what you've got!

Okay, slow down there, slugger! You're getting into some serious Coldsteel The Hedgehog territory here, and trust me, you don't want that.

So, first of all, let's try and figure out what's wrong with this.

To begin with, the original character here is filled with a lot of overused tropes and stereotypes. Generally speaking, you'll want to avoid:

Now, keep in mind, there is no such thing as a 'bad' writing device.

"But Mr. CaT, you said in the section title-"

Think of these writing devices, or 'Tropes', as tools in a toolbox. Some tools are simple and easy to use, such as reasonable superpowers, whereas others are harder to use, like the tropes listed above. It takes a truly skilled writer to pull overused tropes off without insulting your audience.

For more information on tropes you probably want to avoid, I would recommend reading this TV Tropes page.

So, what you're probably wondering at this point is: okay, now I know how to avoid a bad concept, but how do I come up with a good one?

Good ideas are hard to describe, because, well, they're pretty much limitless! Pretty much anything that avoids Discredited Tropes has the potential to be a great series, as long as it's executed well!

How do you execute a concept well? That, my dear readers, is what the rest of this guide will help you with!

THIS IS WHAT HAPPENS WHEN YOU DON'T USE PROPER GRAMMAR.

Anyways, my point is, you can write the best series in existence, but if your grammar is lacking, nobody will even give it a chance. 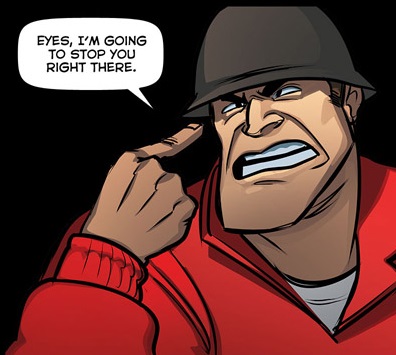 For this, I really only have two major pieces of advice:

Just those two things should help improve your grammar immensely. If you're still having trouble, the University of Northern Iowa has a great list of resources to help you figure out your writing.

Ah, plot, the meat and bones of the fanfiction. Without a good plot, your audience isn't going to be invested, so it's important to have an interesting one. Let's see if we can figure out what makes a plot good.

It's important to keep your plot focused. For instance, say you have a series about Ben trying to find five mystical MacGuffins. Fairly straightforward, but some might say it's a bit boring.

Now let's throw in some twists here and there. As it turns out, the five MacGuffins are really the keys to the prison of an ancient demon, and by uniting them Ben has been tricked into releasing the demon, and now has to stop him from destroying the world. Also fairly simple, but throws in some suspense, and can be worked into the story with some clever foreshadowing.

Now let's go too far. The demon is actually Ben's real father, Omniverse turns out to be a dream sequence created by Azmuth to prevent Ben from saving the universe because he himself turns out to be Albedo, who replaced Azmuth halfway through Ultimate Alien, and Vilgax is Ben's cousin and also actually a woman, and-

Okay, I think you get the point.

Twists and turns are fun and interesting, but adding too many of them, or making them too complex, just opens yourself up to M. Night Shyamalan Syndrome.

You've probably heard the phrase, "all stories are based in conflict", which is, for the most part, incredibly accurate. What you may not know, is that if the conflict isn't relatable, the story is going to be incredibly uninteresting.

Let's get some examples. For instance, a relatable conflict would be the tried and true 'good versus evil' conflict. We all know and relate to the idea of upholding good and overcoming evil, at least to some extent, so this conflict is naturally interesting to us.

For an example of an unrelatable conflict, let's say two rich people are fighting over who has the most pennies. This conflict is not only small in scale, but is confined in relatability to an incredibly small portion of the population, as even the richest of the rich wouldn't have much interest in arguing about such things.

Tone refers to the overall 'feeling' your series gives off. For instance, is your plot light and happy, dark and miserable, or a mixture of both?

Now, what tones are better or worse for a series is completely subjective, but it's important to stick to a tone. Let's see what I mean:

The Original Series stuck to a tone that could vary between light and dark, but never for too long or too deeply either way.

Omniverse stuck to a tone of being very lighthearted.

Alien Force, on the other hand, had problems with this. Though the first two seasons held a consistently darker tone, the third season suddenly switched to a more lighthearted one that heavily clashed with the first two-thirds of the series. This was a complaint of many fans, who felt that the series had become disjointed.

So basically, pick whatever tone or mix of tones you want; just make sure to be consistent, otherwise it could get very grating very quickly.

What is any written work without it's characters?

Well, probably philosophical or educational, but we're getting off topic.

Characters are usually going to be the main focus of your stories, so making them interesting is essential.

Canon characters already have stuff like backstory, powers, personality, appearance, and all that good stuff set up, so writing about them should be easy, right?

See, all that stuff listed above can be helpful, and can make a great fanfiction if done correctly, but it if you don't follow it to a tee, you'll usually end up with an out of character, botched up mess. This can be pretty difficult, especially for newer writers, which is why most people stick to their own original characters, or OCs. Those, however, come with their own set of problems.

I talked about this in the 'Concept' section a bit, but there's more to it than what I've already mentioned.

OCs generally have a negative stigma across the internet, thanks to a little something called Sturgeon's Law. Also known as Sturgeon's Revelation, it dictates that 90% of absolutely any medium is absolute crap.

OCs in particular get singled out for this because of their widespread and overly-bombastic nature. For an example of this, go to Google, type in '[your name here] the hedgehog', and see what you find.

So, how does one go about making a good Original Character? Well, the first thing we need to learn about is:

Named after the main character of a 1974 Star Trek fanfiction parodying the common self-insert characters of the time, the Mary Sue has been a character archetype for longer than you might think, with examples being traced all the way back to reader-submitted stories in a 19th century children's magazine.

Though the exact definition of a 'Mary-Sue' is open to debate, the generally accepted description, as cited by Springhole.net, is 'a character (male, female, or otherwise) who is given or is expected to be given unwarranted preferential treatment and unearned respect, thereby compromising the integrity and believability of the story and/or its characters.'

Of course, there are a lot of different types of Mary Sues, but most tend to follow the above pattern in some way or another.

An easy way to avoid writing a Mary Sue is to think about your personal feelings on the character. Are they just a character to you, or do you think of them as a precious creation that must be held above any other? If you feel like you're becoming too attached to your character, you might want to turn it down a notch.

Now, that's not to say that a character meaning something to you or representing close to you is inherently bad; heck, that would be hypocritical of me. As I said, Tropes Are Tools, and if you can use them correctly you can make a good story. It's just harder to let a character just be a believable character if they're too personal.

If you have some extra time on your hands, I would recommend taking this Mary Sue test for your character.

Now that we know what not to do when making a character, let's learn a little about what to do.

There are a lot of different things to consider when making a character:

If your character isn't relatable, nobody is going to care what they do or what happens to them. This is different than writing a relatable plot, as relatability in a person is something to consider for pretty much every character trait.

Think of it this way: if you were in your character's position, would their ideas and choices make sense to you, even if you didn't agree with them?

Why does your character do what they do? Sure, maybe they want to save the day or rule the world, but why do they want to do those things? This is best to explain in a character's backstory. Remember, make it relatable.

An interesting personality is crucial to a character. To make a good personality, you need to have a balance of good and bad; for example, your character can be super charismatic, but have a debilitating fear of looking bad in the eyes of their peers. Those are both very real personality traits, so your character will be relatable.

On the other hand, if your character is only charismatic, with no flaws, or only insecure, with no strengths, they become much less relatable, because that's not how real people work. You're basically just making a flat cutout instead of a three-dimensional person.

That's all I have for now, but expect more to be added in the future. Research is another important part of writing, and I want to make sure I get things right.

If you have any questions about writing that you want answered, just leave a comment down below, and I'll get to you ASAP.

I hope this guide has been a bit helpful, and wish you a great day!

Retrieved from "https://ben10fanfiction.fandom.com/wiki/CaT%27s_Wacky_Writing_Guide!?oldid=726871"
Community content is available under CC-BY-SA unless otherwise noted.