Start a Wiki
Buzzshock is the Omnitrix's 1.5 DNA sample of a Nosedeenian from the Nosedeen Quasar in Ben 10: Omnitrix Unlimited. He is the Dimension 1 equivalent of Buzzshock.

Buzzshock did not appear before the Omnitrix's 1.5 recalibration in Ben 10: Across the 23rd Dimension, so his appearance remains unknown.

Buzzshock has his Original Series appearance, but the thunderbolt design on his chest is dark green and the Omnitrix 1.5 symbol is colored green and black.

Negative Buzzshock has Buzzshock's Original Series appearance, but the thunderbolt sign on his chest is dark red and the Ultimatrix symbol is colored red and black. 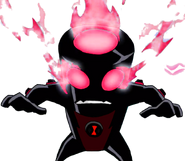 The Nosedeen Quasar was created approximately 4 and half billion years in the future, when the collision of the Milky Way and Andromeda galaxies caused the supermassive black holes located in their respective galactic centers to merge together. In addition, the rearrangement of matter as a result of the collision between the two galaxies created an accretion disk of gases sufficient to make the galactic nucleus of the newly born Milkomeda Galaxy an active one. The Nosedeen Quasar was the most luminous structure observed in eons in that section of the Universe and had a tremendous output of energy.

Over the course of millions of years, life emerged in the high-energy accretion disk orbiting Milkomeda's supermassive black hole: the Nosedeenians. Due to entire star systems being ejected during the galactic collision, as well as the hazardous conditions for most species presented in the Nosedeen Quasar, no contact had been established between other species and the Nosedeenians. The Nosedeenians were therefore the loneliest species in the known Universe. They adopted a cheerful and prankster attitude and made it their lives' purpose to have as much fun as possible.

Thanks to the ample energy located in the quasar, the Nosedeenians were able to duplicate themselves to an enormous degree, to the point that overpopulation could become a serious problem. Luckily, the Nosedeenians took advantage of a phenomenon known as astrophysical jets, relativistic beams of ionized matter created by the supermassive black hole at the center of the quasar, capable of accelerating close to the speed of light. By combining their power, volunteering Nosedeenians rode on those jets, accelerating at speeds surpassing the speed of light and traveling backwards in time. With this method, Nosedeenians spreaded themselves across space and time, bringing their own brand of futuristic mayhem with them.

Although their futuristic tongue is impossible to be translated with present technology, their physiology allows them to speak more "primitive" languages that are compatible with the current Universal Translator model. Gaining information from the Nosedeenians has been a daunting task, as their hyperactive nature makes it difficult to discern many details from them. Even their species name had been disputed for centuries; according to legend, a group of Nosedeenians disclosed their species name to an eager Galvan scientist and after 5 days of waiting and listening, the scientist could only utter afterwards: "Megawhatt?!", which became the widely used term. Nowadays, the more formal-sounding "Nosedeenian" has been adopted, but it appears that the full history of the Nosedeenians will forever remain a mystery.

Retrieved from "https://ben10fanfiction.fandom.com/wiki/Buzzshock_(Earth-32)/Dimension_1?oldid=883472"
Community content is available under CC-BY-SA unless otherwise noted.