Ben 10 Fan Fiction Wiki
Register
Don't have an account?
Sign In
Advertisement
in: UltiVerse, Aliens, Ben 10: Protector of the Omniverse,
and 6 more

Bungee Sponge is the Infinimatrix's DNA sample of an unknown species from an unknown planet in Ben 10: Protector of the Omniverse. He is the Timeline 1 equivalent of Matt Wayne and Tom Perkins' Bungee Sponge.

Bungee Sponge maintains his appearance as designed by Tom Perkins, but the stripes on his clothes are green instead of white. The Infinimatrix symbol is recolored black and green, and his colors match the color palette of Heroes United.

Bungee Sponge has multiple arms and is a "swinging force of justice". He can use the arms on his back to function as bungee cables.

One of Bungee Sponge's signature tricks is to use his arms to hold onto something and stretch himself back, slingshotting himself forward.

Thanks to his elasticity, Bungee Sponge is able to withstand impacts from falling from large heights. 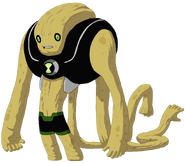