He resembles a 5 foot long bullet with eyes.

Bullet has the ability to fly at incredibly high speeds. His speed rivals that of Jetray. If he hits something after gathering speed he can create explosions. Blowing up doesn't hurt him, though, as it is part of his biology.

He can't walk. Also, he can easily hurt somebody on his team if he's not careful. 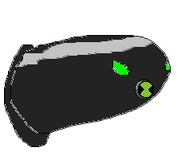 Bullet in action, by Rob Macaroni
Add an image to this gallery
Retrieved from "https://ben10fanfiction.fandom.com/wiki/Bullet?oldid=864938"
Community content is available under CC-BY-SA unless otherwise noted.