Bruce Banner, often referred to as "Dr. Banner", is a Human from Earth, Dimension 616, in Bryce Bowman: Devil's Bounty.

Bruce is a slim man with dark-brown hair and brown eyes. He wears glasses over his eyes at most times, but it is not uncommon to see him without them. Dr. Banner commonly wears a white, collared shirt that he has tucked into his purple dress pants, which are kept up with a belt. He usually has the top two buttons undone and the sleeves rolled up to his elbows.Gigantic, very muscular, green skin, both dark olive (sometimes black) drab hair and eyebrows, bright green eyes, torn purple jeans, barefoot

Dr. Banner first appeared in The Avengers, when he helped Tony Stark examine an unconscious Bryce, following a fight with Thor.

Bruce is a mild-mannered scientist, who tends to keep to himself. He is not too outspoken, though he will occasionally make a sarcastic remark. Bruce acts very meekly about his abilities, not sharing them with Bryce, although it appears that everyone else knows about them.

When asked by Steve to stay behind on a mission, in The Avengers, Bruce was very compliant, simply returning with "I'll just...science."

Bruce is primarily a regular human, but with a super-human intellect. He does not appear to be quite as smart as Tony, but he is not far behind. 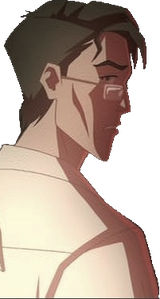