Brandon 10 Books is a literature mini-series for the series, Brandon 10.

Have you ever wanted to experience Brandon 10 without the action but more imagination? Now you can with Brandon 10 Books. For those book loving users or even fans who want a calmer experience. There's also new adventures that take place in the same universe. Show go and read the new Brandon 10 Books! 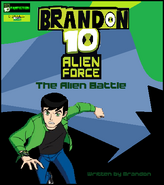 The Alien Battle
Add an image to this gallery
Retrieved from "https://ben10fanfiction.fandom.com/wiki/Brandon_10_Books?oldid=539585"
Community content is available under CC-BY-SA unless otherwise noted.