Brandon 10: Alien Force is a video game in Brandon 10.

After 5 years, an alien invasion puts the Earth in danger. Brandon, with his new team, must put the Omnitrix back on and save the Earth once again. Play through 10 levels as 5 of Brandon’s new aliens including Loch Ness and Crusher! Fight against villains and bosses on locations based from the show! Switch in between Brandon, Coco and Sarah during gameplay! And play with your friends with multiplayer! With Brandon 10, It’s always Hero Time!

The cutscene starts with the team driving on the side of the road at night.

Brandon: And the day was saved again thanks to me.

Sarah: You needed some help Brandon.

Sarah, giggling: He was joking Brandon.

Brandon: I swore I made one of those.

All of a sudden, an explosion is seen near by.

Sarah: What was that?

Brandon: I don't know but we should check it out.

The gameplay cutscene starts with the team investigating.

Brandon: Find anything that caused the explosion?

Coco: I did just now.

The ending cutscene starts with the team checking out the lot.

Sarah: Guys, I think I found something. (pulls device out of crate)

Sarah, giving device: Well, what is it?

Coco: This is bad. It's an plasmatic ray gun. These things can put a hole in a wall 3 houses down.

Brandon: How many are there around here?

Sarah: But if they were making weapons they'd probably need tons more.

Brandon, seeing a crate with a label: Unless they just traded a ton of weapons.

The label reads "Exchange to THE EXTREME BIKERS"

The team arrive at the Extreme Biker Castle. They hide behind a few bushes.

Brandon: They're probably protecting their hundreds of crates of weapons.

Coco: Don't worry I can take these guys.

Sarah: Right. We'll sneak inside while you keep an eye out.

Coco: Thanks. They didn't stand a change.

A bunch of Extreme Bikers arrive.

Brandon: You clear the inside Sarah. (faces the Extreme Bikers and hovers hand above Omnitrix) We got this!

Brandon and Coco run up to Sarah and they meet up at the roof of the castle.

Sarah: Inside of the castle is cleared out.

Brandon, bending over: Yeah, we had to climb those stairs.

Suddently the whole area starts shaking. Then a large robotic dinosaur slams down on the roof and roars at the team.

Sarah: Is that what I think it is?

The Raptor's eyes glow red and it roars and charges to attack.

Brandon: You guys take care of commando over there, I'll make sure this dino goes back to being extint

Brandon: And that's that.

Sarah: So much for getting any information from the Extreme Bikers.

Brandon: Well they were trading with the aliens but what for?

Coco: I guess we're going to have to ask them

Sarah: And how do you expect us to do that?

Coco: Easy we'll track down the nearest alien technology and then interrogate that section until we find the main base.

Brandon: That actually is the smartest thing you've said all day.

Coco: I'm not even sure if I should thank you or punch you right now.

Brandon: I'll let you think about it (starts walking off) but I'll count it as a thank you for now.

The team arrives at a barnyard.

Coco: The nearest source of alien tech is in this area.

Sarah: At an old barn? This isn't making sense. Why would the aliens trade with the Extreme Bikers and then settle at an old barn?

Brandon: I don't know but I have a feeling we're about to find out. Come on.

Brandon: You guys check it out. I'll handle this area.

Brandon finds a piece of alien technology. Sarah and Coco run in.

Brandon: Guys look what I found. It looks like some sort of generator.

Coco, taking technology: It's an energenic generator. These babies can store loads of electricty and power things that need bigger batteries.

Brandon: We need to find out why they need these things.

Sarah: Guys, the scanner says that there is more technology readings by town but it's coming up a bit different.

Coco: I'll check it out. (programs scanner) You guys go check this area out, it probably has more activity over there.

Coco walks up to the residential area of town.

Coco: That alien tech has to be around here.

He then sees a few small aliens wearing red uniforms.

Coco: This ought to be a piece of cake. Time for some payback.

Coco walks into the warehouse and its abandoned.

Coco: Alien tech should be here.

The warehouse doors suddenly close which locks Coco inside.

Voice: You're right about the technology but there's no way you're going to take it from me!

The Bounty Hunter then slams into the ground in front of Coco which knocks him into the doors.

Crusher: Looks like somebody's a little Knock Knock'ed out.

Crusher turns back into Brandon.

Sarah: Coco! Are you ok?

Brandon: Get him out of here. I'll handle the Bounty Hunter.

The Bounty Hunter then falls to the ground knocked out. Sarah and Coco enter the warehouse.

Brandon: Thanks, it wasn't too hard taking down this guy.

Coco: So um how did you guys find me?

Sarah: Well we we're following the synol you sent and-

Brandon: And it lead us straight to here.

Sarah: Plus we knew who's technology it was and knew you were going to get yourself into trouble.

Coco: Well thanks again for-

Brandon: Saving you? Don't mention it I do it all the time.

Sarah, walking over to and picking up a blue mineral: What's this?

Coco, after walking over to Sarah to see: That would be a power crystal. It increases the energy within living organisms.

Sarah: That would explain why the Bounty Hunter was tougher than last time we met.

Brandon: You think it has something to do with the aliens?

Coco: Maybe. Come on there's probably some more alien readings in the area.

The team are driving on the road.

Brandon: So what's our next move?

Sarah: Difficult to say, the readings seem to be coded.

Coco: You think you can hack into that.

Sarah: I might but I'm going to need some resources.

Coco drives around a Zonarian and the car screeches to a stop. Brandon and Coco are knocked out.

Brandon and Coco then join Sarah.

Sarah: Road Hazards. Check out what I found (shows circuit)

Coco: A Nuero-Circuit? These are used in advanced systems. Some aliens use these in camouflage technology.

Sarah, examining: This could be used to find their hidden base.

Coco: You could but there's another piece missing.

Brandon: Guys, you might have to listen to this. (turns up car radio)

Radio: Breaking News! There is an alien attack at the fair tonight! Some call it a fake but citizens say that it was a real danger!

The team arrive at the fair with is now abandoned. Brandon: You think the aliens been here? Coco: They must have. Sarah: Come on they must be around here. Brandon: Look out! A giant pole tips over and Coco pushes Sarah out of the way and it falls down which separates them and Brandon. Brandon: Guys? Sarah: We're ok. Coco: We're going to find another way around. Brandon: Looks like it's just me.

Coco and Sarah run up to Brandon. Brandon: Glad you guys made it. Look what I found. Sarah: The second piece! Coco: They might have been carrying it with the second attack team. Brandon: That means we can get to the base right? Sarah: Yes and no. We can get to their hideaway but not their base. Coco: Knowing them, they'll have hidden tech that will help us find their base once and for all.

The team arrive at a not so large base.

Sarah: This must be it.

Coco: But if the readings are this high there has to be more things in there.

Sarah: It's probably high guarded too.

Brandon: You guys distract them, I'll sneak inside.

Brandon: Base taken care of. And I belive this is what you were looking for? (shows technology)

Sarah: Great now I can finnally locate their base.

Brandon: With any luck, we can stop them before something serious happens.

The team arrives at the secret alien base.

Sarah: Here it is.

Coco: The tech used here could blow a hole in the whole town.

Brandon: We need to get in there.

Coco: There's no way with that type of security.

Coco: They'll be on full alert once you disable that thing.

Brandon: Then that's where you come in. When Sarah takes out the security, you'll take out their offense and I'll handle the boss of these operations.

Coco: It sounds to good to be try. But it might just be stupid enough to work.

Brandon: Right now let's go take down this base.

The sheilds then go down and an alarm is heard.

Brandon: You're up Coco. I'm heading for the command tower.

Coco: Right! (runs over to a guard tower)

Brandon gets to the command tower.

Brandon: Time to end this thing.

Brandon enters the command room which is empty.

Brandon: I know you're in here.

Voice: Clever boy... but not a smart one.

Voice: As if you have the power to defeat the almighty Zonarians.

Brandon: As a matter of fact I do. Why don't you come out and see what it is.

Voice: If you insist you flithy human.

The Zonarian Commander drops by Brandon which knocks him back. Brandon drops all the items they collected and the commander picks it up.

Zonarian Commander: All the components we need. Excellent. (sends items into a machine) It seems you are stupider than I had expected.

Brandon: I can still take you on.

Zonarian Commander: You might have before, Alien Changer, but with these compents that you gathered for me, the Zonarian race will become invincible!

Brandon, showing Omnitrix: Not on my watch!

The Zonarian Commander is defeated and circutrey begins to shorten out. Brandon runs away from the explosion. Meanwhile, Sarah and Coco defeat the last of the Zonarians when they see the tower explode.

Suddenly, a blue figure flies out of the side of the tower. It's Astro and he lands by Sarah and Coco. Astro turns back into Brandon.

Sarah: We thought you were a goner!

Brandon: You couldn't get rid of me that easily.

Coco: And all of traces of the aliens are destroyed.

Brandon: Which means no more attacks. Now I can finally finish that milkshake.

The team walks away from the destroyed scene while not noticing a broken screen saying "Invasion Commence" and other words in an alien language.

Guess the Cheat Codes in the Comments Below! Make sure it looks something like this: Brandon, Brandon, Astro, Crusher. 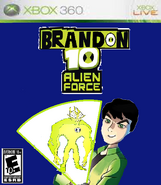 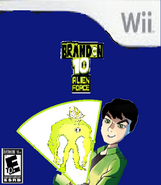 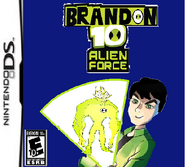 DS Cover
Add an image to this gallery
Retrieved from "https://ben10fanfiction.fandom.com/wiki/Brandon_10:_Alien_Force_(Video_Game)?oldid=726541"
Community content is available under CC-BY-SA unless otherwise noted.