BrandonBot is an alien transformation in Brandon 10.

In Alien Force, BrandonBot is a short, blue and robotic Humanoid. He has black cuff-like hands and a panel on his back. His feet also have black "boots" and he has a blue disc on his forehead. The Omnitrix is located on his chest.

In Ultimate Hero, BrandonBot's appearance does not change majorly from his Alien Force appearance. The Ultimatrix is located on his chest.

BrandonBot has the power to hack into all types of machines including computers, doors, spaceships and more. He can also lock pick, as seen in Mystery Man, and hijack signals, as seen in Race to the Core. BrandonBot also has the ability to produce an electric zap from his hands.

As shown in A Familiar Face, BrandonBot can overloaded with electricity. 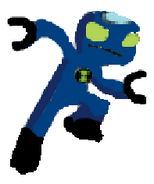 BrandonBot in an Action Pose

BrandonBot in the Alien Force Titles 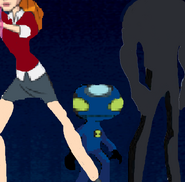 BrandonBot in Sale of a Lifetime
Add an image to this gallery
Retrieved from "https://ben10fanfiction.fandom.com/wiki/BrandonBot?oldid=864923"
Community content is available under CC-BY-SA unless otherwise noted.