Brainstorm is the Omnitrix's DNA sample of a Cerebrocrustacean from the planet Encephalonus IV set to appear in Bryce Bowman: Devil's Bounty.

Brainstorm has a light orange crab-like appearance with pincers for hands.

He can open his skull plates at will to reveal his huge brain, which is pink in color.

He has purple eyes.

Brainstorm has six legs and wears a silver and black neck brace with the Omnitrix on it.

Orange armor forms on Bryce's forearm around the Omnitrix. Bryce spins around slowly, the orange armor continues growing out of every part of Bryce's body. His back expands, tearing through his shirt, and shrinking the length of his torso. Bryce's fingers fuse together, forming a crab-like claw. He spins around again then stops, facing forward. Brainstorm poses with his skull open, lightning arcing between both his hands and exposed brain.

Brainstorm's cranium holds an immense brain, giving him super-massive intelligence. He can solve very difficult calculations mentally in roughly seconds, and knows and can visualize equations and movement of objects as if they're actually there. He can even determine mechanical values and physical properties by simply looking at them.

With his intellect, Brainstorm can perfectly understand the mindsets and mannerisms of his enemies, and any useful objects around him, so he can know exactly what moves to make to take down his enemies. His IQ is shown to be 10^30, or one nonillion.

Brainstorm can produce and manipulate electricity in a variety of ways, such as electrocuting or launching enemies and disabling or destroying machinery, by opening the exoskeleton plates on his skull. He can also charge up his electrical energy to produce a concentrated beam of electricity strong enough to blast starfighters out of the air.

Brainstorm can create electric field waves from his brain to block attacks and knock away enemies and generate protective force fields powerful enough to topple an hyper-evolved Arburian Pelarota.

Brainstorm can use his electrokinesis to telekinetically move objects, size and mass ranging from trains to living beings without damaging or hurting them.

He can also generate and fire electricity from his pincers as well as his brain and can control machinery and other technology using electrokinesis, giving him a form of technokinesis.

Brainstorm is strong enough to pin opponents against walls using his pincers]and rip an Arachnichimp's webs off his face.

Brainstorm is very durable thanks to his shell.

Brainstorm seems to have enhanced dexterity, as he could use a golf club very easily despite having pincers.

Brainstorm is very agile and can perform acrobatics such as somersaults and forward rolls.

Brainstorm can scale walls and walk on an Arachnichimp's webs.

Brainstorm can levitate several stories above the ground.

Brainstorm possesses mnemokinesis, which he can use to alter and erase other beings' memories and thoughts by manipulating their brain pulsations.

Although Brainstorm has never trained himself to do so, he can breath underwater thanks to his gills, which he has to keep them moist when he is on land.

The sonic screams of a Sonorosian can give Brainstorm a headache and make it hard for him to concentrate, suggesting that concentration is required for him to use his powers.

As mentioned above, Brainstorm tends to be rather arrogant and egotistical, which can make him forget to do simple things.

If Brainstorm's shell is closed when releasing electricity, it will shock and injure his brain.

Brainstorm can be shorted out due to the electricity in his brain.

Being a Cerebrocrustacean, Brainstorm is vulnerable to his natural predator, the Vicetopus 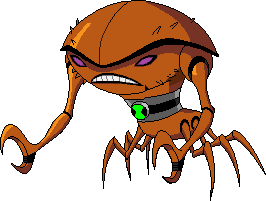 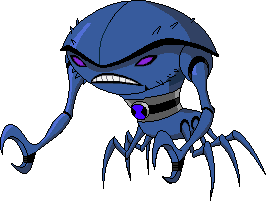