Ben 10 Fan Fiction Wiki
Register
Don't have an account?
Sign In
Advertisement
in: UltiVerse, Aliens, Ben 10: Protector of the Omniverse,
and 18 more

Brainstorm is the Infinimatrix's DNA sample of an Cerebrocrustacean from the planet Encephalonus IV in Ben 10: Protector of the Omniverse. He is the Timeline 1 equivalent of the canon Brainstorm.

Brainstorm has his Alien Force/Ultimate Alien appearance, but the spikes on his head and face are longer, and there is now a second row of spikes on either side of his head as well as two spikes on each of his arms. He wears a black outfit which extends to his legs, and a green belt with a white stripe. He has black clothing with a vertical green stripe on his head and wears black pincerless gloves. his colors match the color palette of Heroes United.

Ben hovers in a dark green background with light green bubbles pulsating rapidly behind him and crouches down. His skin dries and turns brown, before becoming wet and brighter in color. His lower body expands and his legs split into six smaller ones, that support his body. On each hand, four of his fingers merge into one and along with his thumb elongate, turning into pincers. His torso and head merge as well, as his cranium increases greatly in size. His glowing green eyes pop out, as well as his large mouth, which takes a sad expression. A green neck brace with a black stripe and the Infinimatrix symbol on it surrounds his waist. Brainstorm spreads out his arms and closes his pincers, completing the transformation.

Brainstorm usually speaks with very high vocabulary, which can make it difficult for others to understand what he is talking about. He can also come off as arrogant and egotistical, as according to him, he has skill, not luck.

Brainstorm's cranium holds an immense brain, giving him super-massive intelligence. He can solve very difficult calculations mentally in roughly seconds, and knows and can visualize equations and movement of objects as if they're actually there. He can even determine mechanical values and physical properties by simply looking at them.

With his intellect, Brainstorm can perfectly understand the mindsets and mannerisms of his enemies, take advantage of weaknesses, and any useful objects around him, so he can know exactly what moves to make to take down his enemies. His IQ is shown to be 10^30, or one nonillion.

Brainstorm can produce and manipulate electricity in a variety of ways, such as electrocuting or launching enemies and disabling or destroying machinery, by opening the exoskeleton plates on his skull. Additionally, he can control the voltage of his electrokinetic attacks.

Brainstorm can create electric field waves from his brain to block attacks and knock away enemies and generate protective force fields.

Brainstorm can use his electrokinesis to telekinetically move objects, size and mass ranging from trains to living beings without damaging or hurting them. He can also generate and fire electricity from both his pincers and his brain that can control machinery and other technology, giving him a form of technokinesis.

Brainstorm is strong enough to pin opponents against walls using his pincers and rip an Arachnichimp's webs off his face. His pincers are also sharp enough to stab through metal.

Brainstorm is very durable thanks to his shell.

Brainstorm seems to have enhanced dexterity, as he can use a golf club very easily despite having pincers.

Brainstorm is very agile and can perform acrobatics such as somersaults and forward rolls.

Brainstorm can scale walls and walk on an Arachnichimp's webs.

Brainstorm can levitate several stories above the ground.

Brainstorm is capable of breathing underwater thanks to his gills, which he has to keep them moist when he is on land.

Brainstorm's shell gives him a protective coat-like layer, which can resist the cold temperatures of places such as mountains.

Brainstorm possesses mnemokinesis, which he can use to alter and erase other beings' memories and thoughts by manipulating their brain pulsations.

The sonic screams of a Sonorosian can give Brainstorm a headache and make it hard for him to concentrate, suggesting that concentration is required for him to use his powers.

As mentioned above, Brainstorm tends to be rather arrogant and egotistical, which can make him forget to do simple things.

Brainstorm can be shorted out due to the electricity in his brain.

Being a Cerebrocrustacean, Brainstorm is vulnerable to being trapped by a member of Vicetopus' species.

If Brainstorm's shell is closed when releasing electricity, it will shock and injure his brain.

Brainstorm is vulnerable to the gravikinetic abilities of a Galilean. 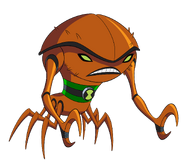