Start a Wiki
Brago is a halfhuman, half Galilean Plumber on Earth-68. He appears in the series John Smith 10 and Ryder 10.  In John Smith 10, he was Magister of Earth for a time, then he surrendered his post, resigning from the Plumbers. In Ryder 10, he is just an officer, though has a high level of authority.

Brago was originally a cold and uncaring character, doing only his task. He saw John and others as weak, and not worth his time. However, overtime, he sees John as a valuable ally, saying that he was one of the few Plumbers he could trust for backup. He originally worked alone, but after seeing how John worked with a team, he formed his own team, with Xylene and Andreas. He doesn't show much emotion, putting his duties as a Plumber before everything.

Brago is a specialist in manipulating gravity. He can make objects lighter or heavier, and is able to manipulate gravity around all objects. He also developed the ability to focus gravity into condensed "gravity balls" of varying sizes. They can range from simple energy balls, to giant, colliding forces of gravity that can tear through his enemies, even able to defeat Vilgax and injure Diagon.

He has enhanced strength and durability, and can cover his body in reddish brown rock, the same as regular Galilean's skins, increasing his durability even more. He also has his own orbit, allowing attacks to orbit around him. It is these powers that made him the strongest Plumber alive, with the possible exception of John.

It is possible that he's obtained the ability to create gravity.

HIs powers are consciously used, so if hit by an attack, most notably and commonly lightning, while using his gravity powers, they stop as he loses focus. He isn't as powerful on planets with lower gravity. That's because he manipulates the gravity around him, and doesn't produce it. If his rock layering is damaged enough, or if he gets tired enough, the rock layering is destroyed.

Brago appears in the series Ryder 10, still a Plumber. However, compared to his John Smith 10 version, he is toned down in power, but not in potential. He is only a Plumber Officer on Earth, and his powers are the same as regular Galileans. 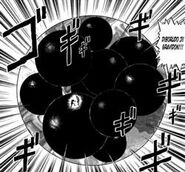 Black gravity attack, used first against Diagon
Add an image to this gallery

Retrieved from "https://ben10fanfiction.fandom.com/wiki/Brago?oldid=762427"
Community content is available under CC-BY-SA unless otherwise noted.