Bryce Bowman, nicknamed "Bowman 10,000" is the fully-grown Bryce Bowman. He, and the citizens of the galaxy call him Bowman 10,000. This was started because: "Another me called himself Bowman 23 and I liked it."

Bowman 10,000 is much more mature than his 16 year old counterpart, as well as considerably more serious. He has taken his responsibility as a hero more heavily than originally. This was caused by a battle with an unnamed villian, in addition to his experiences that will not be revealed yet. Bowman 10,000 has become a sort of ashhole with his jokes, becoming sardonic as opposed to sarcastic.

Bowman 10,000 is slightly taller and signifigantly more muscular than Bryce. He has aged to be thirty-five and obviously changge as such. He has a full beard, and the same style hair. He wears a black t-shirt with dark gray triangles on the sides, forming a sort of hourglass symbol, and green trim. He wears black, fingerless gloves. Bowman 10,000 has a silver belt around his waist, holding up his black pants. He wears the Omnitrix on his left wrist.

Bowman 10,000 first appeared in the episode Bowman 10,000, where he fought along side Bryce against Death Dragon

In The Darkest Night: Part One, Bowman 10,000 appeared just before the episode ended. 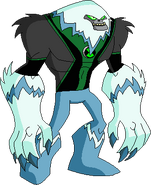 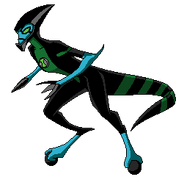