Start a Wiki
Bonecrusher is a Esqueletan from the planet Espiritu in Simien 10: Polyverse, Simien 10: Blood Monkey and Ben 10: Ruins Of Earth. This is a redone vesion of the original page.

Bonecrusher is a skeleton alien. He has the Polytrix symbol on his shoulder, and has yellow eyes on his skull.

Bonecrusher's limbs are also not bound by any joints whatsoever, allowing most of his limbs to spin 360 for example.

Bonecrusher can regenerate his body parts by reconnecting to them. While small shards of bone can fly easily back into place, larger pieces such as his arms or head must be reconnected manually.

Bonecrusher can also use his regeneration to tear off parts of his body as weapons, for instance his rib swords in All Falls Down.

Bonecrusher can telepathically control his limbs from afar. His limbs retain his abilities of flight and regeneration as well.

Bonecrusher has a small amount of flight ability, allowing him to hover slowly. This ability mostly allows his limbs to fly towards him.

Bonecrusher has some level of dead resurrection, however the strength of this ability is unclear as most of its revivals are mindless zombies.

If a part is too far from Bonecrusher, it is much harder to move it back to him. He is also rather fragile despite his strength and can be broken apart easily.

Bonecrusher's original .jpg picture. He has more ribs and his arms are a little miscolored. 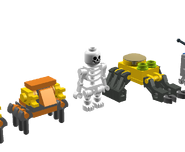 Bonecrusher's lego version
Add an image to this gallery
Retrieved from "https://ben10fanfiction.fandom.com/wiki/Bonecrusher?oldid=864891"
Community content is available under CC-BY-SA unless otherwise noted.