Boarswax is the Omnitrix's DNA sample of a Hamsapien from the planet Bacos IV in Earth-1010.

Boarswax is a humanoid pig whose back is covered in a molten red wax that is secreted from his body. He has three short spines of hardened wax running down his back. There are seemingly metal holes on either palm. The Omnitrix symbol is on his chest.

In terms of height, Boarswax comes up to Ben's shoulders.

Boarswax's primary power is his ability to generate and manipulate Wax. This wax is generated from the holes in his hands. He can generate the Wax at any temperature so long as it is still liquid, effectively allowing him to decide how long it will take the wax to freeze (sometimes almost instantly). His wax manipulation powers are very primitive, however, and he can only form basic constructs using wax.

The wax seeping from Boarswax's back is molten, and burns to the touch. This doesn't hurt him at all.

Boarswax is slightly stronger than most humans, however is still one of the weaker fighters in the Omnitrix. If he were moving a couch, he might still struggle to move it himself.

Whilst Boarswax isn't hurt by molten wax, he can still be hurt by fire and extreme heat.

Boarswax was first used and named in Burning Bridges. He caused a Techadon Robot to destroy itself, and later used his wax to restrain The Blacksmith. Ben used Boarswax to prepare to fight 4N8S in From The Ashes, though the two don't end up fighting. Boarswax then defeats the Covenant of Fire with help from the Starlit Sky. He was used off screen to restrain a pair of Chimeran guards in In The Shadow Of Vilgax.

He returned in Dead London, where he proved the most effective at slowing down the tomb creature but was ultimately as useless as the rest of Ben's aliens. Ben tried to use Boarswax again in Life On Mars to fend off the newly created Brave New World, however his wax was easily deflected using Barrier Reef's shields. He is picked up and thrown into a wall, defeated. 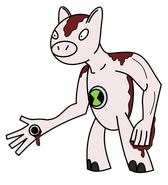 Boarswax's old artwork, which previously appeared in the main poster for Road Trip 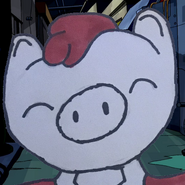