Bloodpire is free use alien, feel free to use him in your own series.

Ben and Albedo in spaceship.

Whampire (Ben) flying in the spaceship.

Albedo: I'am not a normal Vladat i'am a Enhanced Vladat.

Bloodpire is a vampire-like alien with pale-blue skin and sharp yellow teeth. He wears a black and grey jumpsuit, with the chest plate looking somewhat similar to that of Big Chill's. He wears black gloves with red fingers that possess sharp claws, has red markings on his suit, and wears a red mask with spikes on it. His head is rather large and features red eyes. His head spikes are part of his suit and they do not cover any part of his body. Bloodpire also has red flaps under his arms, resembling those of Jetray or the wings of a bat. 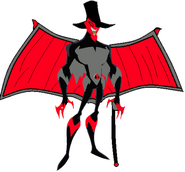 Bloodpire with background.
Add an image to this gallery

Retrieved from "https://ben10fanfiction.fandom.com/wiki/Bloodpire?oldid=814588"
Community content is available under CC-BY-SA unless otherwise noted.