Blind-Eye is an alien soon to appear in the featured series of July 2012, Hean 10.

Blind-Eye has the ability to share multiple visions. He shoots grey circular nets at opponents' eyes, sucking out their vision so they become blind and giving the vision to Blind-Eye by the net shooting out a ruby red laser of where the eye will be located on Hean. Once the vision of the opponent is finally Blind-Eye's, the enemy's eye can show up anywhere on Hean's body; chest, arm, leg or head.

He can use other opponents visions to see where they're headed, or what they're doing- while the owners of the lost visions have no eyesight whatsoever.

If any toxic gas or liquid gets into any of Hean's enemy's eyes, it could ruin their vision-causing the eye to depart off of Hean's chest, leg, arm or head.

Blind-Eye is a tall white humanoid that has no eyes, until he collects his enemies vision.

For Toon, by The Awesome Jack 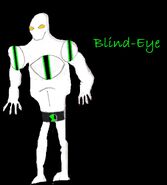 Edited version for Toon by The Awesome Jack
Add an image to this gallery
Retrieved from "https://ben10fanfiction.fandom.com/wiki/Blind-Eye?oldid=755550"
Community content is available under CC-BY-SA unless otherwise noted.