Blackout is the DNA sample of a Apagon from the planet Tenebris in Simien 10: Blood Monkey.

Blackout is a dark grey tall, bulky humanoid. He possess four small dark grey wings on his back which allow him to fly.

His head is in the middle of his chest, and he has three fingers on each hand. His Omnitrix symbol is under his head on his stomach.

Blackout is incredibly strong and durable due to his bulky size.

His wings allow him to fly with agility, including in space or under water. Blackout can also survive in space.

Blackout can release black mist from the palms of his hand of hands and from his back pores, which spreads quickly and can completely darken an area in seconds, creating a thick darkness which blacks out all light sources and weakens smell and sounds. Blackout can see through his mist and additionally possesses night vision.

The mist does not have any additional negative effects, but cannot be removed easily. Blackout can also suck back the mist from his pores into his body to remove it.

If Blackout's wings are damaged, he will have problems flying.

Blackout's black mist can be removed using any vacuums, powerful air abilities, or by other Apagons sucking it back.

Blackout's mist can still be seen through by creatures with enhanced senses or who sense body heat or mana.

His size can also be a problem as he cannot easily enter small spaces. 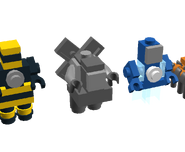 Original Blackout as a minifig.