This is The Powerful Lords Version, you might be looking for Black Scythe, Bryce Bowmann: Origins version

Black Scythe (Formerly Bryce Bowmann)is a corrupted Human from the planet Earth. He used to be Bryce Bowmann but he went rogue. He's one of The 5 Powerful Lords

Black Scythe has dark brown-green-grey skin. He has a grey skull design painted on his face.

He wears a black hood with a cape, whose underside is dark purple. He wears black armbands on his forearms and smaller ones under his shoulders. His torso is exposed through a hole in the front of his cloak. Scythe wears black pants and a black metallic belt.

He has the Beta Rune on his chest, just above a silver chest piece.

Black Scythe's main power is Chaos Mana control. He uses this in various ways, such as summoning Chaos Mana creatures, throwing Chaos Mana disks, firing Chaos Mana blasts etc. His secondary power is Black Magic. Black magic is more complicated and more deadly than regular spells and whatnot. Next on the list is a staff called 'Eternal Suffering'. The final power is his Beta Rune. He has a small amount of enhanced agility as well as other aspects that may be enhanced via magic.

As all Powerful LOrds, he was a hero at the start but went rogue. together with the others he conquered Dimension 51 and went to enslave the rest of the universe. His own goal is unknown, but it's not the same as the others.

He appears near the end of season 1. In an episode, he is thought to be killed by Dark Essence, but it turns out to be Ulti. He later appears in the same episode. He can also be seen in later episodes when taking over Viscosia.

In Season 2, he goes through a little struggle with himself, realising he no longer wants to be a part of the Powerful LOrds. After finding out his Loved One is still alive, he decides to drop it all and go back, but he is stabbed by an old enemy.

Black Scythe grew up as Bryce Bowman in Dimension 51. He got to the age of about twenty-three when he started to study Black Magic. He had very little control over it at the time, but slowly learned more and more. By the age of 14 he began to understand the darkness of the Magic he was dealing with. He then decided to stop with Black Magic and pursue Mana. He unfortunately was trained by Arthor Domnius Gamiam, a mage skilled in Chaos Mana. Bowman learned how to handle Chaos Mana and manipulate it in the ways listed above. The use of Chaos Mana corrupted his mind, causing him to return to wielding Black Magic. This use of the two evil magics tainted his mind further, and changed his skin to a dark, green-grey. The corruption in his mind caused him to forget his true identity, so he began calling himself Black Scythe. Soon after, he met the esteemed Bezel and trained under him for a short time. When he decided to leave, Bezel gave him the staff 'Eternal Suffering'. Scythe used this power to seek out the Beta Rune and obtained it quite easily. At the age of 16, he joined up with the Powerful Lords to protect his homeworld against Demonous but soon went rouge after that.

Black Scythe has a sardonic personality, constantly making remarks that would be considered rude, but he says them in a sarcastic way. He is very prideful: always talking about his 'accomplishments' and the fact that he was personally handed the Eternal Suffering from Bezel. He will come across as arrogant as well. He often toys with his opponents, mocking their various fighting styles and "lack of ability for victory". He will often try to find the worst way for him to kill/injure his opponents, being one of the cruellest beings in existence (mostly due to the corrupted mind).

The "Suffering" channels black magic into a more usable form. Since Black Scythe is a master of black magic, it allows him to perform spells effortlessly.

The Beta Rune is a Rune that enhances the natural strength, speed, endurance, and durability of its user to around that of 200%.

His arrogance can be used to the advantage of his enemies, as well as bringing up his lost loved ones. This causes him to become angry and irrational, and will not make proper decisions while like this. 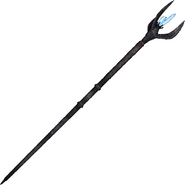 The 'Eternal Suffering' staff
Add an image to this gallery

Retrieved from "https://ben10fanfiction.fandom.com/wiki/Black_Scythe_(Earth-666)?oldid=883990"
Community content is available under CC-BY-SA unless otherwise noted.