Bisector is an alien created by CaT that is free for anyone to use as long as they give proper credit.

Bisector has the ability to copy DNA from other lifeforms into each half of his body, allowing those halves to gain the abilities of whatever he's copied. The copied DNA will be reflected in a slight mutation of the half it's affecting.

In nature, this ability is limited to whatever inhabits his species' surroundings at the moment, but with the Omnitrix, he can access the DNA of multiple aliens at any time, giving him a wide range of options.

Each half of his body is predictably only half as strong as whatever alien he's using in terms of their abilities, and he can't use the same DNA for both sides of his body at the same time to work around it, meaning his power combinations should be chosen carefully to get the most out of the transformation

If you use Bisector in your series, please note their appearance(s) here. 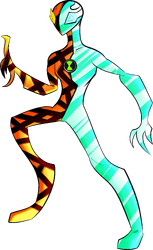 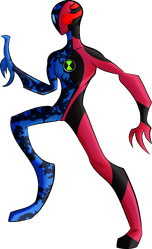 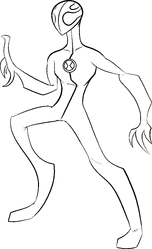 Blank unpixel for free editing.
Add an image to this gallery

Retrieved from "https://ben10fanfiction.fandom.com/wiki/Bisector?oldid=912526"
Community content is available under CC-BY-SA unless otherwise noted.