Start a Wiki
Bigfoot is an alien in Noah 10.

He is a Sasquatch from Pelos

He resembles the Yeti in "Escape from Aggregor", but instead of having white fur, his fur is brown. He has the Matrix on his chest and green eyes.

In Super Matrix, he looks basically the same, except he is more muscular and has wrist and ankle bands.

Bigfoot possess super strength. He can jump high distances, though not as high as Crashhopper or Slinky. He also has enhanced agility and can climb on walls. He can also perform a special move called the Bigfoot Bang where he stomps his foot and causes a shockwave. 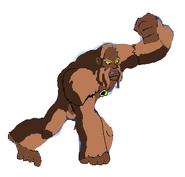 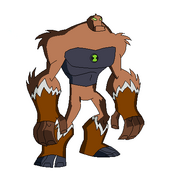 Ancy's Bigfoot
Add an image to this gallery
Retrieved from "https://ben10fanfiction.fandom.com/wiki/Bigfoot_(Alien)?oldid=781410"
Community content is available under CC-BY-SA unless otherwise noted.