In Ben 10: The New Omniverse, Big Chill has a much more muscular build and is more hunched over, also now having sharp eyebrows surrounding his eyes. He has a green belt on his waist with a black stripe where the Omnitrix MK10/Ultimatrix MK10 symbol is located. He has bigger wings, claws, and a black beard design under his chin. His wings are less like a moth and more like a bat. His chest piece now extend over his entire chest and sports three gill-like marks on each side. There is also a line running down his abdomen. He has a wider mouth and has a blue stripe on his chin. He also now has a third antenna that folds onto his back in wing mode. When his wings are folded, the antennae form a larger hood and the robe goes down to his ankles instead on his knees.

He has white skin and white patches on him.

He has blue skin and cyan patches on him.

Ultimate Ben 10 only has Kylmyys Big Chill. His appearance is the same as Omniverse, minus the belt. His Ultimatrix symbol is also on his chest. 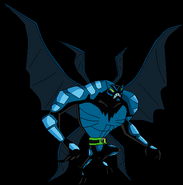 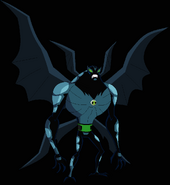 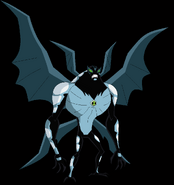 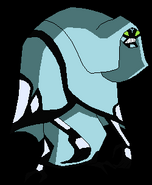 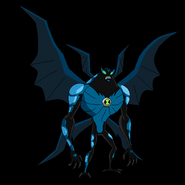 Big Chill is capable of breathing a gas, wind or beam that reduces the temperature surrounding it, turns to ice constructs mid air or upon touching a target, or encasing a target completely in ice. His breath can also be as strong as wind, enough to push the moving Rust Bucket off a cliff, as seen in Kevin's Big Score. As seen in Singlehanded, he can also generate ice generating beams from his hands which he can manipulate. In Above and Beyond, he was able to cause ice constructs he can manipulate to form on the ground by touching it. In Birds of a Feather, he froze a large gate by touching it, allowing Simian to easily kick it down. In Vilgax Attacks, Big Chill was capable of generating spiked balls of ice around his fists, as well as hurling ice spikes. He could also cause these spikes to sprout from the ground that surrounds him. In Cosmic Destruction, he can attack with an "icy uppercut," as well as manipulate the cold around him to make a frosty tornado.

Big Chill can become intangible, to the point where he can cause objects to freeze by phasing through them, though he can choose not to.

Big Chill has enhanced strength: in Save the Last Dance, when Big Chill was on a metal-eating spree, he effortlessly ripped apart a large metal statue and snapped iron girders in half. This strength also extends to his jaws, as Big Chill was capable of chewing up metal statues, poles, buildings, signs, iron girders, serving trays, and drinking molten steel.

Big Chill is immune to extreme temperatures, both hot and cold.

Big Chill can survive underwater, as well as in the vacuum of space.

Like Jetray, Big Chill can use his feet to hold things while flying.

Big Chill's intangibility is useless against opponents who can also turn intangible, as their intangibility cancels out. The only inanimate objects that have been able to touch intangible Big Chill are the Rust Bucket's netting, Shield of Ziegel, and the Techadon Robots' defense systems.

Big Chill has shown a weakness against electricity as it can hit him while he is intangible. Instances include when he was hit by Brainstorm's electrical attack, when Ben used it against Albedo in Good Copy, Bad Copy. As well as Vilgax shocking an intangible Big Chill with the Shield of Ziegel in Vengeance of Vilgax: Part 2.