Big Chill is the Infinity's DNA sample of a Necrofriggian from the planet Mykdl'dy in Bryce Bowman: Origins.

Big Chill has a light-blue, nearly white, body with black and white spots on his arms and legs that resemble ice chunks, a light blue torso, and large blue eyes.

He has three pointed fingers and a thumb on each hand, and two toes on each foot and a third toe-like extension on his ankles.

The Infinity appears on his left shoulder

Ice chunks form on Bryce's arms, legs, and chest. His toes morph together into two toes and a toe sprouts on his heel. His eye expands and becomes bug-like, while changing completely blue. Four large, white, moth-like wings grow from his back, along with antennae. The wings and antennae fold into a cloak, and Big Chill spins around. Big Chill jumps up and opens his wings as a pose, before being engulfed in green light.

In Face to Face... Sort of, Big Chill is defeated by Vulkanus and Sixsix when Sixsix fires an EMP that temporarily disables the Infinity.

In The Intergalactic Strike Force, Big Chill drops through the floors in Azmuth's tower to find Nemevoc.

in Time Trouble, Big Chill attempted to fight the Time Monster, but was killed, which caused him to be deleted from the Infinity until Professor Paradox restored him.

In Price of Fame, Big Chill blocked a fire blast from Hex, protecting Will Harangue.

In Friend of My Enemy, Big Chill chased Amsol out of an interrogation room and onto a street. Fighting didn't last very long.

In Ghostfreaked Out (BBO), Big Chill immobilized Zs'Skayr as he had possessed Gwen and Big Chill didn't want to hurt her.

In The Knight's Challenge, Big Chill was used to fight a band of Forever Knights, but was taken down by a blast from a Laser Lance. He then evolved into Ultimate Big Chill to save himself from being beheaded.

Big Chill is capable of breathing a freezing vapor that reduces the temperature surrounding the vapor, encasing targets in ice. He can generate ice beams from his hands that he can manipulate. Big Chill is capable of generating spiked balls of ice around his fists, as well as hurling ice spikes. He can also cause these spikes to sprout from the ground that surrounds him. He can attack with an, "icy uppercut," as well as manipulate the cold around him to make a frosty tornado.

Big Chill can also survive in the vacuum of space. 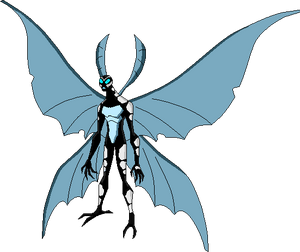 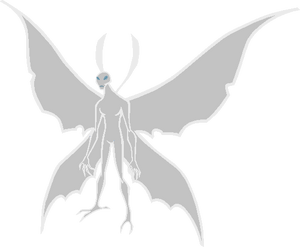 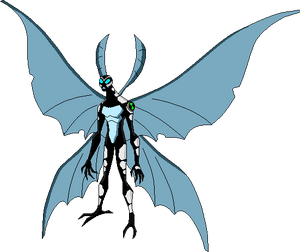