Big Chill is the Omnitrix's DNA sample of a Necrofriggian from the planet Kylmyys in Earth-1010.

Big Chill has a black body with cyan patches on his arms, shoulders, legs, the back of his wings, and the back of his neck. He has three pointed fingers and a thumb on each hand, and two toes on each foot and a third toe-like extension on his ankles. The Omnitrix symbol appears on his chest.

Freezeghost, unlike most Dimension 23 aliens, does not have a differing appearance based on its home dimension. Instead, Freezeghost is actually a DNA sample taken from the Mykdl'dy race of Necrofriggians. He has an icy blue appearance.

The Dimension 23 Omnitrix still has a copy of the Kylmyys race's DNA and can potentially use that form as well, and in return the Prime Omnitrix can also access the Mykdl'dy DNA sample.

Big Chill's main power is his cryokinesis, which manifests in the form of a powerful icy breath. This breath can freeze objects solid with ease.

He can also turn himself intangible. Whilst phasing through an object, he can choose to freeze it solid.

He has enhanced strength, being able to rip apart metal and even eat it.

Big Chill is immune to extreme temperatures, both hot and cold. He does not need to breath, either. Combining these powers, he can easily survive in space.

Big Chill is weak to electricity, as it can affect him even when he is intangible.

Big Chill's intangibility is useless against opponents who can also turn intangible, as their intangibility cancels out. Certain fluids and substances can also neutralise his intangibility, a specific example being the super-tangible material used to make the prison cells in the Plumber base.

Ben Tennyson used Big Chill in Chapter 9 to fight through Apollo's flagship, taking advantage of his immunity to fire. Big Chill was briefly used in Chapter 10 after Apollo defeated NRG to escape, but he failed and collapsed instead.

Gwen 10 fought Apollo with her Necrofriggian form in Chapter 15, however it proved ineffectual thanks to Ascalon.

Ben 23'000 used Freezeghost in Chapter 17 during the final battle with Ironclad Apollo.

Big Chill was used by Ben Prime in Burning Bridges while he still possessed the T1 Omnitrix to fight Koraxx, Kraab, and Sixsix, however his intangibility was neutralised by Kraab's Hyper-tangible Pseudofluid before he was defeated by Koraxx. 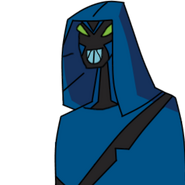 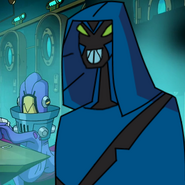