Benmutt is The Omnitrix DNA sample of a Vulpimancer from planet Vulpin.

Benmutt appears to be a big, red dog with no eyes or tail. His teeth are very defined and stick out of his mouth. Wildmutt has no eyes, instead using his sense of smell and hearing in vision's place, which are aided by three nostrils located on each side of his neck.

Wildmutt has great agility that makes him able to run, jump and climb objects at high speed. Wildmutt also has sharp claws. Wildmutt has incredible sense of smell. He is able to track people by their scent, even if they are many miles away. Wildmutt is also strong enough to break the roof of a vehicle. While Wildmutt is usually quadruped, he can stand on his hind legs and by waving his forepaws into fists he can punch.

Wildmutt can't talk. Instead, he communicates through a combination of barking and snarling. Due to this, it is extremely difficult for anyone to understand him.  Wildmutt's senses are very sensitive, making him vulnerable to anything that can overwhelm his senses such as a high pitched sound or a strong smell. 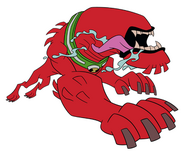