Ben To The Ten (also known as BTTT) is a Movie by Ahmad, Reo and Flame.

Ben To The Ten

This is a movie based off real Ben 10 except that it uses Beta Information from the early stages of the ORiginal series. For Instance:

Ben and Gwen Come out of the School

Ben: Ready for a Summer Holiday?

Gwen: Thanks for Inviting me.

Ben: Well, what are friends for?

Max Drives by in his RV. He opens the door.

Max: Get in Kids!

Gwen and Ben run inside. Gwen looks around

Gwen: Nice place you got!

Ben: Hey! where is our first stop??

Gwen: Where is the Bathroom?

Max: It's that door to the right over there.

Ben: Why not the one on the left that looks like a closet?

Max: That's for something else.

Ben: Can we see it Grandpa?

Max: I'll think about it. But first, get ready to go to the campsite.

Max presss a button in front of him, activating the RV. He zooms forward. Meanwhile, Gwen and Ben sit next to each other on the supposedly lunch table.

Ben: So, did you get anything fun?

Gwen takes out her laptop. She puts it on the table.

Ben: So, you got any games?

Gwen: Actually, no... I was researching Nuclear Power and-

Ben gets up and seats himself in the passenger seat next to his Grandfather.

Ben: Grandpa, do you have somethng to do?

Max: Well, it's just like any card game except that the back of the cards is designed with a creepy picture of vampires.

Ben gets up and walks towards the beds. But he looks at the closet next to him. He opens it. He finds a big machine

Max lets go the wheel and rushes towards Ben. Gwen attempts to get up as well, but she slams into Max. Ben finds a big red button. He moves his hand closer and presses it. We zoom out of the RV. There is an explosion, a small one. This leaves the entire RV intact, however, the entire part that includes the closet is gone... and so is Ben.

Gwen: What was that Machine?

Max: Well, I've always been so science-obssessed. I'm a scientist since long ago. I wanted to check out the rest of dimensions that have different Physics and stuff. I invented this machine. But it wasn't as I expected. It backfired. I rebuilt it. But the red button IS NEVER the activation button. It was in case my lab rat hasn't returned, it would reverse the polarity. Though I don't know what's the opposite of dimension travel.

Suddenly, several blue orbs fly from the debris of the machine and they form together to show...

That's right. The Orbs reformed into Ben. However, he now looks taller, his eyes are now green and his shirt is just like the one in the concept art. He rubs his head.

Max: No, I should've told you guys about the machine.

Ben: C'mon, Grandpa, it's no problem. At least I'm alright.

Max: No, you aren't. I just found out that, instead of doing the original function of the machine, which is to change our location to another dimension by changing the Physics and by teleportation, it brought in several versions of you with their dimension's Physics in here. Though I don't know where they are.

Gwen: Is it possible that they are in Ben? After all, the orbs flew out of the debris.

Max: Maybe. So that means Ben can manipulate the Physics around him to gain any powers he wants for his own.

Ben faints. Later, Ben wakes up on his bed. Gwen and Max are next to him. The RV has stopped

Ben: Grandpa, I had these creepy dream that I can turn into-

Max: -Into Alternate Versions of yourself.

Ben: So It did happen.

Max: Now, I do not recommend that you attempt to do anything stupid.

Gwen: Mr. Tennyson, please let him do it.

Ben: Alright, now let's just hope there's an Alternate version of me that is Ultra-Ben.

Ben Concentrates. A Hologram appears behind him similar to the holograms of Ultimate Ben.

Max: I did not expect that.

Ben closes his eyes and then opens them again, with them glowing green. A cape grows out of his back, his googles form around his eyes, his shirt becomes dry dark blue, he grows a belt, some sort of headphones grow on his ears and he gets waay taller.

Alternate Ben: Woah! It worked! I'm now Ultra-Ben! Wait, can I ever revert to my main form?

Max: I guess so. But I encourage you to do it often.

Ultra-Ben: Nah. I can be however I want. Why should I go back to being so weak.

Max: She's right, Ben. You need to revert often. And besides, you don't how your Alternate selves work, or how much you can turn into.

Ultra-Ben walks towards the hole in the RV. He walks out of the RV using that.

Ultra-Ben takes into the air, leaving a gust of dust and takes off flying away as Superman music plays. Suddenly, he reverts and falls towards the ground.

Before he falls to his doom, he concentrates and the hologram appears again. He transforms into Ultra-Ben again and propels himself in the air.

Later, Ben is back in the RV and Max and Gwen are seated next to him.

Ben: So, I discovered that I currently can turn into ten alternate versions.

Ben: It's obviously just Ten, then why would the movie be called Ben To The Ten then.

Max: No breaking the fourth wall!

A nearby Radio starts sending some sort of message.

Man through Intercome: HELP! We're being attacked by some sort of-

We hear the sounds of a frog eating something, then we hear another voice through the intercom.

Other Man: By me. I, Dr. Aloysius James Animo, am getting my revenge on Dr. Kelly! Heed my warning!

We hear the sound of wood hitting something, then we hear another man.

Gwen: Wow. You could go save those people, right, Ben?

Max and Gwen turn around and find Ultra-Ben already taking off.

Later, at a store, Dr. Animo on his Mutant Frog is battling some cops. Ultra-Ben bursts through the window and stands tall.

Dr. Animo: I, Dr. Animo, will rule the Earth, by controlling your animals and mutating them!!!

Ultra-Ben: That's it? That might be the worst idea ever thought of by mankind.

Dr. Animo's Mutant Frog eats Ultra-Ben. In a few moments, the Mutant Forg ignites and it spits out a ball of fire. The ball of fire is revealed to be a fire version of Ben.

Alternate Ben: Woah! It worked! I got a flame cover now! NOVAFIRE! Man, I like shouting names.

Dr. Animo's Frog wraps it's tongue at NovaFire, who superheats himself and burns off it's tongue. It releases it's grasp over him.

NovaFire: And now, let's bring on the burn!

NovaFire forms a fireball in his hand and throws it at the Mutant Frog, hititng it hard. NovaFire runs towards the Mutant Frog and blasts hot flames at it. Dr. Animo jumps off it.

NovaFire fires a stream of fire all around the Mutant Frog, separating the ground under Wilson from the rest. He levitates the now on fire boulder and slams it into the ground, knocking out the Mutant Frog.

NovaFire throws a fire ball at Dr. Animo's Transmodulator, melting it. The Mutant Frog reverts to a regular Frog.

NovaFire transforms into Ultra-Ben. Ultra-Ben takes off, creating a crater and a cloud of dust where he left. He flies away at high speed. He crashes into a crater next to the RV.  Regular Ben climbs out of it.

Ben runs inside the RV through the same hole that he destroyed earlier.

Gwen and Max are watching TV. It shows the police arresting Dr. Animo.

Gwen: Ben? Did YOU torture that Frog like that?

Ben: So what? It's just an Animal.

We see multiple police cars surrounding the store that had Dr. Animo and Ben's fight. Several SACT members run inside and find several scorch marks on the ground and on the wall. Lieutenant Steel walks in and inspects the scorch marks. He then turns to the Shop Owner.

Lt. Steel: So, what did you exactly see?

Shop Owner: I told you. Some Superman guy came in, then transformed into some sort of firey guy.

Lt. Steel: I see. Can you show me some footage?

Shop Owner: Sure, the camera captured it all.

He shows him a video of Ultra Ben be eaten by the Mutant Frog, and it spitting out NovaFire in a Computer's screen.

Shop Owner: Aliens? Diffenately not. He sounds Human. He even talks like one.

Lt. Steel walks towards one of his sentries.

Lt. Steel: We must try to get a strand of his DNA, to identify his species.

The sentry nods and walks off. Meanwhile, Ben has blue skin, and he is wearing black clothes, and he is running in the desert.

Alternate Ben: And I thought Ultra Ben was awesome! This guy is toooo awesome to compare!

He dashes rapidly, and zips away in a blinding speed. He then runs in, carrying two galloons of gasoline. He then zips towards Max's RV, and he drops the galloons.

Alternate Ben: There you go, Granpa!

Max: Woah. That was fast.

Rocketboost runs off, then runs in circles, creating a tornado. He then jumps in the tornado and he is sent flying in the air. He yells in joy, as he transforms into a rockey version of Ben. He smashes into the ground, creating a crater.

Gwen walks in, staring in surprise at Ben. She walks towards Max, who appears surprised as well.

Gwen: Is something wrong with Ben?

Max: He's been obsessed with his powers in a long time. He tried all of his ten forms at once. He hasn't used his regular form in a while.

Meanwhile, the Alternate Ben waves his arms around, and levitates a huge boulder.

He thrusts his arm, shooting the boulder in the distance. He grows out a stone pole, and shifts back to Rocketboost. He runs towards the boulder.

He stops where the boulder is.

He shifts to NovaFire. He shoots fireballs into the air, creating fireworks. He then transforms into the stone Alternate Ben again, and levitates the boulder, shooting it into the air.

He transforms into an alternate Ben with 4 arms and grey skin. The boulder plummets towards him, and he punches it with two fists, shattering it.

He transforms into Rocketboost and runs back to the Earth Pole.

Max: Ben, can you please come in here and rest for a moment?

Rocketboost zooms in front of them.

Rocketboost: I don't need to rest. I'm Ben To The Ten! Yeah!

He then zooms away. Max facepalms. A montage shows Rocketboost outruning a train, with his tongue sticking out, Ultra Ben flying up a sky scrapper, NovaFire catching a few robbers, MutantArms holding four weights at once, an Alternate Ben that looks like a Ghost scaring off some clowns, an Alternate Ben that is made of plants sneaking into a Lion's Cage in a zoo, a female Alternate Ben going shopping with Gwen, (lolwut) and finally, Stonehound building a statue of himself with Earth. The montage ends, and the RV stops at the beach. 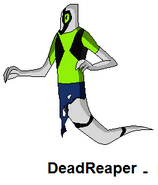 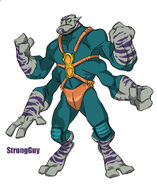 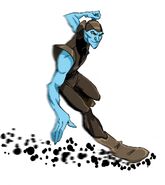 Rootstreach
Add an image to this gallery

Retrieved from "https://ben10fanfiction.fandom.com/wiki/Ben_To_The_Ten?oldid=844467"
Community content is available under CC-BY-SA unless otherwise noted.