Ben Tennyson is a sixteen year old boy with soft green eyes, pale skin and short hair which is light brown in colour much like mainstream Ben. Ben's clothes consist largely of green and black or white colours. When it comes to his jeans Ben tends to wear brown or blue in colour and white and green sneakers.

He alternates between his AF/UA outfit and the ones he wears in Omniverse.

In the same fashion as the mainstream universe Ben this Ben also wears his full Omnitrix on his right wrist.

Ben Is much like his mainstream counter-part, a goofball when he wants to be and serious when needed. He is not the brightest at times but when it really counts he comes through. Ben is very protective of his family and friends as with what he does they can and have; been dragged into the crossfire. See Ben Tennyson for more info: When it comes to his twin sister however Ben is often reluctant to let her near the more dangerous foes, wanting nothing more then for her to have a normal teenager's life without having to worry about Alien attacks and the like.

This Ben uses the same Omnitrix as Ben Tennyson, as well as all his aliens.

Despite the fact that Ben can transform into various Alien forms, he is still human and is susceptible to making mistakes, as well as common human injuries/illnesses.

Ben Tennyson lived his life much like his mainstream counter-part with the exception of having a younger twin sister named Kennedy. The two grew up side by side, spending almost all their waking time together, some of that time with Gwen.

One thing Ben did solo was a trip to the circus with Grandpa Max when he was 5 1/2, something he was excited for up untill he saw the clown makeup his grandpa was wearing.

Ben, along with his sister and cousin went on the summer trip with their grandfather where both himself, and Kennedy managed to find themselves each an Omnitrix. Azmuth had made a secondary Omnitrix should something happen to the first and it along with Ben's had been fired off into Earth's atmosphere. The summer went as standard with the standard run of the mill villains for the Tennyson family and Ben found himself growing closer to his sister and cousin then he'd been before.

Life went on as normal with "Ben 10: Secret of the Omnitrix" Acting as a series finale. Ben at age twelve decided to remove his Omnitrix, struggling to take the device off before finally getting it off in an effort to try and live a normal life while his sister Kenedy kept hers on. Eventually he took up the hero buiseness once again after the disappearance of Grandpa Max..

Shortly after defeating a freaky purple squid-like alien that was robbing a bank in Undertown, Ben and his partner Rook Blonko were informed by Grandpa Max that their presence was needed to help resolve a war on the other sie of a distance galaxy. 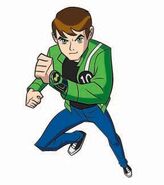 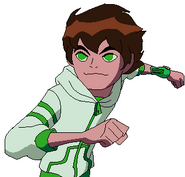 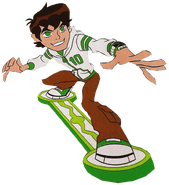 Add an image to this gallery
Retrieved from "https://ben10fanfiction.fandom.com/wiki/Ben_Tennyson_(Earth_55)?oldid=863736"
Community content is available under CC-BY-SA unless otherwise noted.